At least once a year, sometimes twice, I drive from England to Europe. I check that the dog has got a valid pet passport, load up my car and hit the road. Sometimes I have a plan sometimes there is no real plan, just a vague destination, typically about ten days in the future.

On this occasion I’m driving from England through France, Belgium and Luxembourg to Germany. I’m going to visit my daughter Lucy in Trier for a couple of days. Then to the Black Forest for a bit of walking. Next it’s Austria, to catch up with my old school friend Rosie. Finally I’ll head over the Alps into Italy and then to the south of France – my final destination.

We are at the Channel Tunnel, Folkestone, England

Sasha ‘the dog’ prepares for the journey

From Oxford to Northern France via Channel Tunnel

One thing I’ve noticed over the years, is that, for me, the journey is more important than the destination. When I’m driving through Europe I feel liberated and free. I am not constrained by the commitments and responsibilities of every day life. The journey gives me the opportunity to think and plan and consider new ideas. As I drive my car south my mind wanders and I allow it to soar and cruise, from one thought to the next, like the hawks riding the thermal currents above the wheat fields of Northern France.

It isn’t just the English Channel that separates the British from Continental Europe. It is our insular, slightly xenophobic attitude too. Even today in an era of cheap flights, endless weekend breaks to European cities and holidays on the Mediterranean coast, fewer and fewer Brits actually study languages at school and even fewer study languages at university level. This is ironic, especially when you consider that in the days of Henry VIII the area around Calais was actually British territory. In fact in 1520 there was a hugely important meeting, nowadays we’d call it a summit, between Henry VIII of England and Francois I of France. This encounter took place in the fields just about ten miles from Calais, in the small village of Guines. For almost three weeks during June of 1520 the great leaders of the day and their courtiers enjoyed a spectacle of concerts, sporting events, music, theatre and banquets. Each side vying to put on the most extravagant and impressive displays of skill and artistry. The event became known as ‘The Field of the Cloth of Gold’. Gigantic canvas tents were constructed in the countryside, decorated with the finest silks and most beautiful fabrics. it is said that some of the cloth used was woven with gold thread, thus the name of the event ‘Field of the Cloth of Gold’.

The official reason for this high level meeting of two important European monarchs was to cement and strengthen relations between France and England and to ‘outlaw war forever’ between Christian nations. In reality it was an opportunity for the two kings to show off their wealth, status and power to one another. In the case of Henry VIII it was also a chance to build a closer relationship with Francois I before he upset the Pope, massively and permanently by leaving the Church of Rome and creating the Church of England: with surprise, surprise Henry VIII as its head! His first act on creating the Church of England was to grant himself a divorce from Catherine of Aragon and to marry Anne Boleyn. Divorce was not permitted when the Pope was in charge. But when you are head of the Church of England, you can make up your own rules and that is precisely what Henry did.

As I drive through the wheat fields of Northern France I can’t help smiling to myself. I imagine Henry VIII and Francois I meeting here just about 500 years ago. I ask myself, what if anything has really changed with our ‘great’ leaders. It is said that, if you study history, and learn about the past, then there are no surprises in modern politics, it has all happened before…

Of course it’s not good to dwell too much on the past. I switch my thoughts to the present and the short drive I have in front of me, along the uncrowded and well maintained autoroutes of France to my hotel for the night. I’ve treated myself and Sasha the dog to a night at the wonderful, idyllic even, Chateau de Beaulieu. A country house hotel, with beautiful gardens, bright modern rooms and fabulous food. This is the perfect way to start my 2018 road trip through Europe.  As my tyres crunch onto the gravel of the hotel car park I notice the rows of vines, in the garden, in full leaf and loaded with grapes, growing and ripening in the sun. The weather has been hot and sunny for weeks so that probably means a good grape harvest this year. After hours in the car Sasha the dog loves the freedom of the gardens and rushes about investigating new smells and interesting paths.

The chef-patron of Chateau de Beaulieu is Monsieur Marc Meurin, he is a dedicated and creative chef. In his garden there are herbs, vegetables and flowers. In the trees behind the hotel is a shaded hen house, occupied by numerous raucous chickens. Meanwhile in the front garden there are several bee hives producing honey for lucky guests. Later when I sit down for dinner in the garden the quality of the food and the service is, as the French would say ‘impeccable’. I select the fixed menu for Euros € 32 a delicious foie gras starter, halibut main course and exquisite summer fruit sensation for dessert. The quality of the food makes each mouthful a pleasure. Washed down with an aperitif of champagne and a glass of Sancerre to go with the white fish, I have to confess I’m in gastronomic heaven. In fact Chef Meurin’s reputation is so good that the restaurant is packed, even though it is a Wednesday night. After all the French know a thing or two about high quality food and wine. 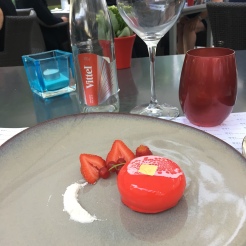 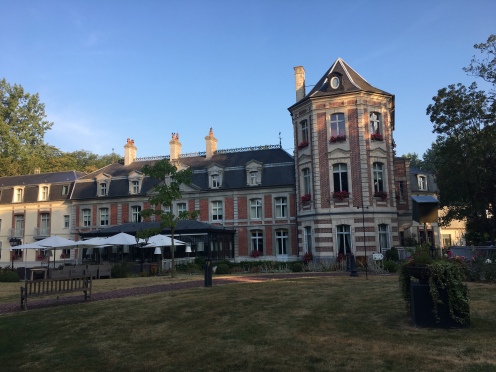 Sasha in the garden at Chateau de Beaulieu 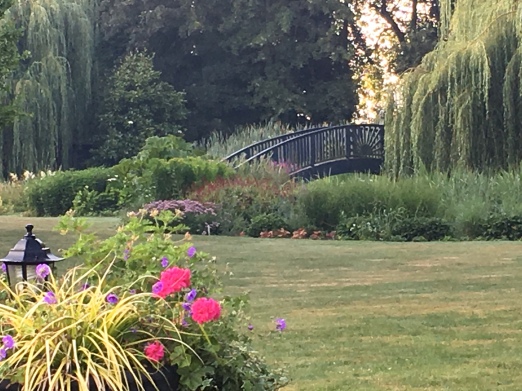 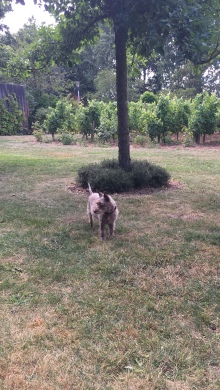 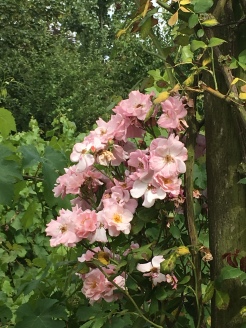 After a good night’s sleep and a breakfast of fresh pastries and coffee it’s time to head off. I’m on the road again. This time the route will take me through France, Belgium, Luxembourg and then into Germany to meet up with my daughter Lucy. I should be there by 4 pm. That’s not bad, four countries in one day. Once again my mind wanders to my good fortune, the freedom of the ‘open road’ and a pleasant day’s driving in front of me. Just me, the dog and the car. Total freedom!

Sasha – come on, it’s time to get going! We are back on the road time – it is time for our next big adventure!

4 thoughts on “The freedom of the open road”