Sicily in the Movies

In the 1960’s Burt Lancaster starred in a film called ‘The Leopard’ about an elderly Sicilian aristocrat coming to the end of his days. The main character finds his world changing and his wealth dwindling, as his palaces crumble and his health deteriorates.  The story is set in the 19th century when famous patriots like Garibaldi were fighting to unify the peninsula of Italy and the island of Sicily into a single ‘nation state’. Inspired by the book written by Giuseppe Tomasi di Lampedusa, himself a Sicilian nobleman, the story follows the lives of a wealthy Sicilian family as their world changes for ever. It portrays a land of majestic palaces, civil unrest and fading dreams. To add romance to the brew Lampedusa wrote only one novel and failed to get it published during his lifetime. It wasn’t until after his death that Giorgio Bassani (himself a famous novelist) recognised the quality and elegance of Lampedusa’s manuscript and organised its publication. The book is lyrical, evocative and atmospheric. The descriptions of the interior of the family home, a huge palace falling into disrepair have stayed with me for years. The book was such a success that a film followed five years later (1963). The film is beautifully composed and uses a selection of majestic palaces (see below) including the beautifully named ‘Donnafugata’ (Escaping Woman). Burt Lancaster stars as The Prince – he is magnificent in the role, haughty and aristocratic and at the same time sensitive and vulnerable. 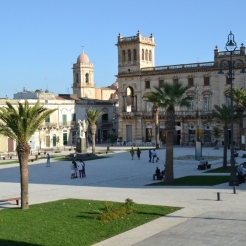 Sicily has always been a land of stark contrasts, land-owners living in vast baroque palaces on the one hand, poverty-stricken workers on the other.  When a cinema first comes to a little town in the centre of Sicily in the 1940s the town is trans-fixed by the weekly entertainment on offer. The locals queue for hours to gain access to the cinema, even taking a chair with them to ensure they have a seat. Cinema Paradiso (1988) brilliantly portrays life in rural Sicily in the forties. The action revolves around the projectionist and the young boy who helps him to show the films – always to packed and raucous crowds.  When a new film arrives in town it has to be checked for unsuitable content by a lascivious priest. Years later the young boy returns to his home town for the funeral of Alfredo (the projectionist), he has becomes a famous film director. He looks up his childhood sweetheart. The film is poignant, joyful and tragic. 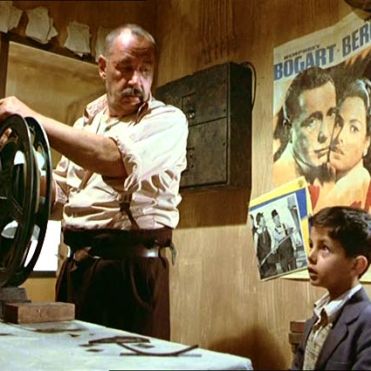 The local priest in charge of censoring the films

On a much lighter note, one of my favourite films based in Sicily is the hilarious and thoroughly Italian ‘Divorce Italian Style’ starring the handsome, brooding and petulant Marcello Mastroianni. Once again an impoverished landowner is trapped in a falling down palace, living with his extended family. Unhappily married he is secretly in love with his cousin Angela. He spends his days conjuring up wild and ambitious schemes to dispose of his wife. Then he’ll be free to marry the lovely Angela. This film, shot in black and white, shows the wonderful baroque buildings of Sicily, its churches and palaces. It also conveys the stranglehold the Roman Catholic Church had on the population and the exceptional power wielded by the local priest – especially in remote towns and villages.

Divorce Italian Style is an Italian 1960s comedy about love and marriage. Mastroianni dreams of disposing of his wife, the question is – how?

In the last few years Sicily has appeared again on our screens as the stomping ground of Commisario Montalbano, the popular police detective, created by author Andrea Camilleri.  In fact the town of Porto Empedocle where the TV series is based, has changed its name to Porto Empedocle Vigata. Vigata is the name of the fictional town where the Commisario lives. For an evening of pure entertainment you can’t beat an episode or two of Montalbano!!

Don’t hesitate to send comments or observations directly to me here: Contact Janet

For more on Sicily read my articles about:

IMPORTANT NOTE – Giorgio Bassani – The man responsible for publishing The Leopard was a man of genius, a poet, writer and literary editor – born in Ferrara and author of The Garden of the Finzi Contini. A novel about the Jewish community in Ferrara in the years leading up to the war. I have written this article about him:

8 thoughts on “Sicily in the Movies”