Sicily is the largest island in the Mediterranean Sea. It is has been invaded and dominated by the marauding armies of Greece, North Africa and Europe for more than 2000 years. Greece, Carthage, Rome and Byzantium all fought amongst themselves for control of this fertile island, strategically located in the middle of the ‘Mare Nostrum’. 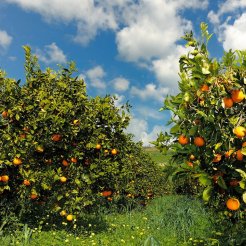 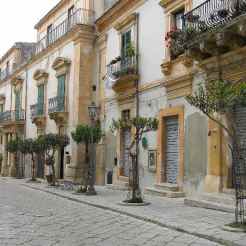 Approaching the village of Scicli, Sicily
I’ve just completed an eleven hour working day. But it’s not really work – I’m a tour guide with a small group of lovely ladies. I’m introducing them to the delights of Sicily, the largest and probably the most interesting island in the Mediterranean. We are learning about Sicily and the Sicilians and how they feel about their culture and heritage.

VAL DI NOTO – We’ve spent three days in the Baroque towns and villages of the Val di Noto, in south-east Sicily. This is a UNESCO world heritage site. Here a unique type of architecture is found, known as the Sicilian Baroque or the Late Baroque style. In 1693 this region suffered a devastating earthquake which destroyed many towns, villages, churches, farms and homes, it killed more than 60,000 people. As the dust settled the Spanish viceroys, who ruled Sicily for the Spanish monarchy, decided to rebuild the towns in the flamboyant Baroque style, with churches and cathedrals towering above the streets, often reached by numerous steps. The collection of taxes was briefly suspended and these funds were used instead on a massive reconstruction project. The aim was to create an impressive and elaborate style – the facades of public buildings were ornamented with detailed plaster work, gargoyles, life-size statues of the saints and numerous pillars and pilasters. The result was a grand style of architecture unique to Sicily. It became known as Sicilian Baroque. 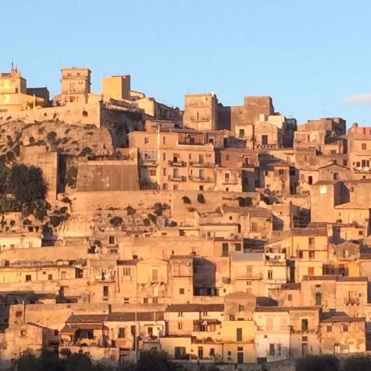 Modica in the evening sunshine 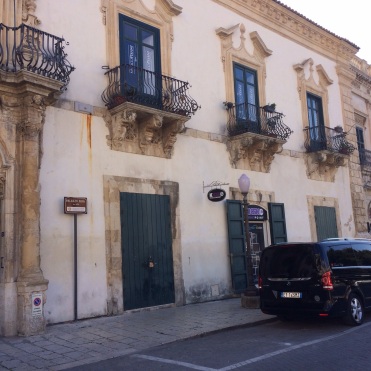 A Baroque Palace, Modica
MODICA – In Modica there was not one, but two cathedrals constructed in honour of St Peter and St George. Whilst in nearby Ragusa the duomo of St George towers above the town in a defiant attempt to outdo its neighbours. Intense rivalry between towns, even conflict and war was common in the past. Today this region is experiencing a flood of visitors, not only from Italy, but also from all over Europe and further afield…….this is, at least in part, due to the roaring success of Montalbano, an Italian detective series developed for Italian TV and now an international success story. The Montalbano character first appeared in a series of novels by the author Andrea Camellieri. He is a solitary and idiosyncratic detective working in Sicily. He has lunch in tiny trattorias over-looking the sea, he is moody, enigmatic and compelling to watch. The programmes are filmed against the backdrop of the Mediterranean Sea, baroque palaces and charming piazzas. Former Mafia bosses live in glorious isolation in rambling castles, whilst the detective himself lives in a house positioned right on the beach. Of course there is a regular and steady supply of murders to fill our television screens week after week. In the cold and gloomy European winters Montalbano and his Sicilian adventures have become enormously popular.

DONNAFUGATA – First stop this morning was the Castello di Donnafugata, a recently restored country house with an impressive Venetian facade – it reminds me of the Doge’s Palace in Venice. The shabby, semi-ruined workshops and farm buildings that line the route to the Castello show how life would have been here a century or two ago. Especially for the ordinary working people – blacksmiths, farm labourers and domestic staff. The castle has featured in the Montalbano series and is a wonderful place to visit, with its sprawling park and gardens. From here it’s about 20 minutes to the coast and Punta Secca, where we can see Montalbano’s house on the beach. A bit further along the coast is Enzo a Mare, a water-front restaurant in a wooden hut perched over the sand and the location for the detective’s grumpy lunches. The restaurant is now such a destination that the owners close in September and don’t reopen until the following April. They probably head off to the Caribbean for the winter. 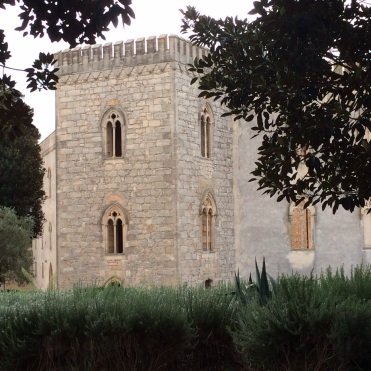 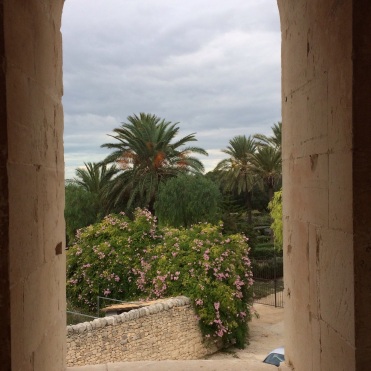 From the terrace of Donnafugata, looking towards the Mediterranean Sea

The sea at Punta Secca, Montalbano’s back yard!

Montalbano’s House – Punta Secca, Sicily
PUNTA SECCA – We sat in the Caffe delle Rose, by the beach and ate delicious Italian ice creams and fresh cannoli – Sicilian biscuits filled with cream, ricotta or chocolate. The breaking of the waves and the saltiness of the sea air is invigorating and relaxing – all at the same time.

LUNCH today was at the traditional and imaginatively named ‘Osteria di Sapori Perduti’ where the menu is based on typical dishes of the Ragusa area. Fresh pasta, ‘sugo di maiale’ and involtini, tiny bread-crumbed parcels containing  ricotta, herbs and pork. The family that run the restaurant offered us complimentary coffee and a really warm welcome. After lunch we headed straight across the road to the oldest chocolate maker in Modica. Here at Bonajuto they’ve been creating Sicilian chocolate for almost 200 years. The shop is lined with polished wood cabinets filled with chocolate of all flavours, beautifully packaged and ready for dispatch worldwide. The kitchen (or laboratorio) is clearly visible and filled with gleaming stainless steel vats and sparkling work surfaces.

NEXT there’s a quick visit to the duomo (cathedral) of Modica, where a local pensioner takes it upon himself to give us a guided tour of the interior of the church. Curiously delivered in a mixture of Sicilian dialect and Italian it was tricky to follow his train of thought. We finally escaped unscathed after about half an hour of detailed and tedious explanation of the interior chapels and roof paintings. By now the sun was beginning to sink in the sky and we were back on the road for a drive up the hill and a view of Modica from the ‘belvedere’. Cameras out, photos taken. At that exact moment a cavalcade of 1960s Fiat 500s came powering up the hill to our vantage point. About ten of them in all, part of the Fiat 500 Club of Modica parked where we were standing. Drivers and passengers hopped out to enjoy the view. Some were from the United States. What a great way to see this area of hilltop towns and narrow, winding roads.

MEMORIES – I’m reminded of working as a tour guide in Venice, before I went to university. Several of the coach drivers had Fiat 500 cars. They’d drive their 53-seat coaches to the company garage for the night, park up and then hop into a tiny Fiat 500 to drive home. The contrast was so stark and so extreme – it always made me laugh. The Fiat 500 is embedded deep into the Italian psyche. The cars were built by Fiat in their Torino factory from the late 1950s. The idea was that Fiat would produce a small affordable car that would ‘mobilise’ the Italian people and help to develop Italy’s economy by making it’s workforce flexible and dynamic. 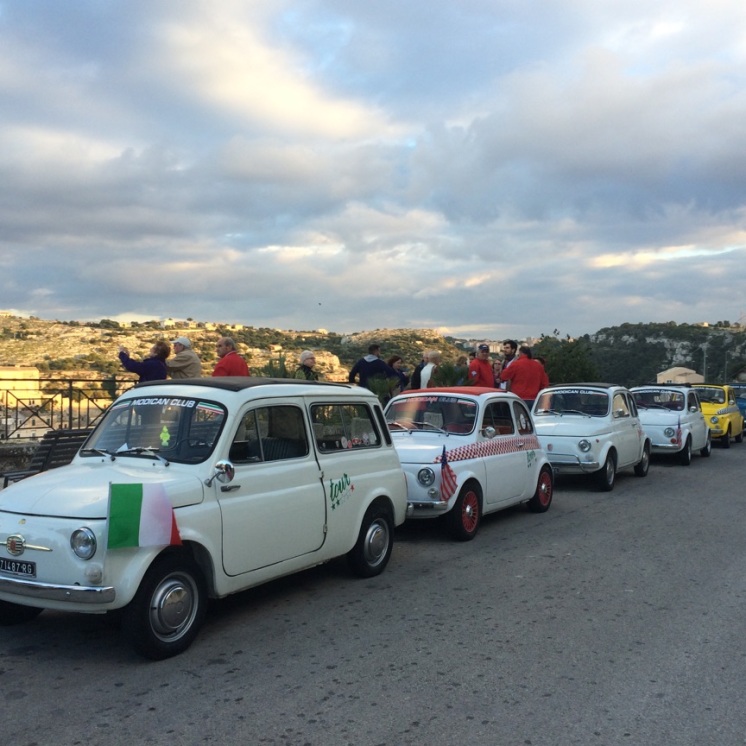 Modica – Fiat 500s now halt!
THE FIAT 500 – It’s great to see these little cars still in use. In fact Giorgio, our driver, told me proudly that he too owns a Fiat 500 and he takes it for a spin once in a while. Usually on public holidays or on Ferragosto, the main Italian holiday in August.

I’m struck by the intense pride that Sicilians feel for their island and their heritage and for all things Italian. Whilst their relationship with ‘the mainland’ has never been an easy one they love all things ‘Italian’ fine food and wines, ice cream, Fiat 500s. This corner of Sicily is doing well economically at the moment.

‘We even have a Maserati dealership in Ragusa’ Giorgio tells me proudly. 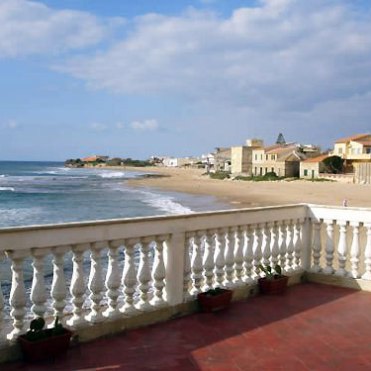 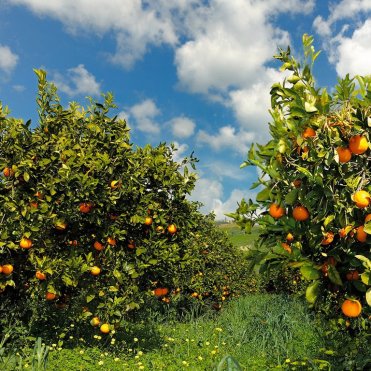