Santorini is an island that rises majestically from the sea, dark volcanic cliffs exuding a sense of permanence, determination, destiny.  This is a story of passion and creativity. A story inspired by this unique and beautiful island.

I’ve always loved Santorini, ever since I visited in the 1980s with my future husband. We were back-packing around the Greek Islands and Santorini was our first stop. It was early in the season and the entire population was preparing for the arrival of hordes of tourists in just a few weeks time. Every hotelier, business owner and itinerant labourer was busy slapping large quantities of bright blue paint onto every conceivable surface; walls, doors, tables, chairs. Not to mention casual passers-by who got a little too close to the paintbrush. We accidentally put one of our rucksacks down in a corner at the port, only to discover that it too had been liberally doused with blue paint. A fitting souvenir of the island!

There’s a mule track that runs from the water’s edge up to the town of Fira. It ascends the steep rock face, zig-zagging up more than 500 steps. In the old days this was the only way from the ‘Old Port’ to the town. Visitors could inspect the black, volcanic cliffs, as they (or their long-suffering mule) huffed and puffed to the top. By the time you’ve climbed from sea level up to the town, you’ve ascended more than 1300 feet or about 400 metres. That’s more than half a million years of geological time. The view from the top of the narrow track across the caldera[1] is breath-taking. It’s fun to look out to sea and imagine the timber ships anchored in the harbour in the days of the Ancient Greeks.  Now  it’s a popular anchorage for cruise ships. 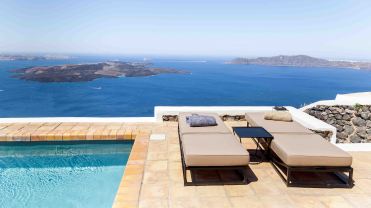 A chair with a view

A map of the island
Legend has it that the lost city of Atlantis may have existed on this site, destroyed by a massive volcanic eruption thousands of years ago. Certainly the horseshoe shaped island and circular caldera give strong visual clues that what we see today is the remains of a much larger island. Archaeologists have found evidence of an eruption around 1600 BC[2]. They say that every cloud has a silver lining, in the case of Santorini the eruption created a huge natural harbour, sheltered from the wind and from rough seas. The city of Ancient Thera is here, built on the slopes of Messa Vuono at the south-west end of the island. It was an ideal site for human settlement, easy to defend and naturally fortified. Today it is a fascinating archaeological site.

It was this island of Santorini and these views that captivated Vassilis Valambous. Vassilis is the hero of this story, I like to imagine him arriving here at the ‘Old Port’ more than twenty five years ago. I can picture him now, tanned and elegant, stepping from the ferry onto the quay. He is wearing navy linen shorts and a perfectly ironed white shirt, he has sun glasses on, I think they are RayBans, he has a spring in his step. Initially staying with friends I imagine him taking a stroll through the town of Oia, with it’s white-washed houses and blue-domed churches. Tiny, walled walk ways leading from one part of town to the next. Gates opening into courtyards, a glimpse of a patio or tiny stair-case leading to a studio or an attic.  Santorini has always been popular with artists, keen to capture the natural light and exceptional vistas of the island. During the long summer months geraniums cascade over the walls adding vibrancy and colour to the white buildings and the intensely blue sky. And everywhere, just everywhere the view of the caldera and the sparkling brilliance of the sea.

Santorini had woven her magic spell on Vassilis, he bought a plot of land over-looking the sea just north of the town of Fira. A few years later he bought the adjacent plot and construction of a fabulously located summer villa began. Just like the geraniums the villa cascades down the hillside, creating secluded courtyards, private patios, rooms that open directly onto the view. And what a view, you open your door in the morning and the turquoise waters of the caldera are there to welcome you to a new day. This is a place to relax and regenerate. Vassilis was a bon viveur, he loved art, good food, wine, the finer things in life. When he built his house high on the cliff with it’s inspirational views he’d found his paradise on Earth. Vassilis just loved the smell of basil plants, for him they symbolised summer. There were always basil plants strategically located at the front door of the house. As the name Vassilis translated into English is actually Basil the basil plants take on an intrinsic importance at this exceptional property.

Sadly Vassilis is no longer with us, but his wonderful, imaginative legacy remains. The villa is named The Vasilicos in his memory. His children Daphne and Yannis have taken on the property and after several years of hard work and dedication they have created an exceptional and luxurious boutique hotel. Even on the busiest and hottest summer days, stepping through the gate, the visitor leaves the hustle and bustle behind and steps into a private estate.  An oasis of seclusion, privacy and calm. This is an elegant private home, where the scent of basil fills the air! Fairy-tale stairways lead down to small terraces, white-washed walls curve round corners and reveal antique oak doors leading into cool, elegant bedrooms. Everywhere, just everywhere is the magical, entrancing view of the sea.

The Vasilicos is very much a family affair. Daphne’s husband Makis supervises the day-to-day running of the hotel. One minute he’s welcoming guests and the next he’s mixing a cocktail. Whilst Daphne has personally selected every detail of the decoration, military chests and ironware from Athens, fine bed linens, a choice of pillows to ensure the perfect night’s sleep. Even a telescope in one of the suites for a closer look at the heavens or a ship anchored in the caldera. Maria the receptionist welcomes guests as if they are arriving at a private home.  Freshly made lemonade is served to new arrivals. Then it is just a short walk to a beautiful, spacious room with a private terrace and a spectacular view of the caldera. The atmosphere is under-stated and yet highly professional. You can order whatever you want whenever you want it. A perfect gin and tonic is just a moment away.

I just love the idea that Vassilis would have sat here and enjoyed this same view, chatting to friends, drinking fine wines and enjoying the freshest, local fish. I’m sure that he would have loved the wines of Vassaltis, produced by his son Yannis. These fresh, crisp white wines are produced from the family’s vines, then aged in traditional French oak barrels before being delivered to The Vasilicos in a 1960s Mini. Perfect! I like to think that Vassilis might have known (even slightly) Aristotle Onassis. I need to ask Daphne that one! I have a quick rummage through the library and find just what I’m looking for ‘The Magus’ by John Fowles. If you don’t know the book or the film go and find it now. It’s a beautifully constructed and clever thriller about a young man who finds himself on a Greek Island, a guest in a fabulous private villa.

State-of-the-art equipment at the vineyard
But excuse me I’ve got to go now there’s a tray of gin and tonic prepared on the terrace and a very smartly dressed gentleman has invited me to join him for conversation and a cocktail. There’s a scent of basil in the air and the sun is beginning to sink in the sky. Well one thing is for certain, I never want to leave the magical island of Santorini any time soon…………..

A note on the author:

Janet Simmonds (nee Panagakis) is a British-born tour guide, writer and company director. Born in Liverpool with a slightly Greek grand-father and a very Greek great grand-father she has a special affinity with the Mediterranean, especially Italy and Greece. Trained as a Geographer and Art Historian at the Universities of Oxford and Manchester, Janet has spent most of her adult life running specialist travel companies and travelling extensively. Several times a year she leads small groups to different parts of the Mediterranean. Most recently to Sicily. She writes about her travels and observations. www.educated-traveller.com 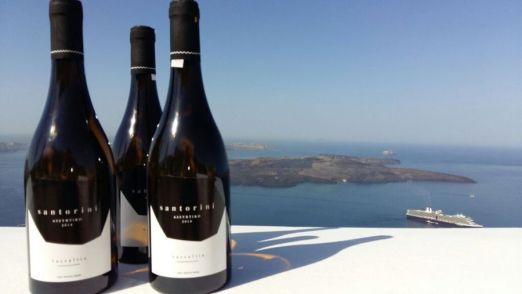 From vineyard to view…..

Dine on the terrace or by the pool

Seclusion on the terrace
Footnotes:

7 thoughts on “The island of Santorini weaves her magical spell……”