ROME – One of the best ways to discover the ancient city of Rome is to discover what lies beneath your feet. Just beyond the Colosseum heading out of the city is the Basilica of San Clemente, an imposing, mosaic-infested medieval church dating from the 12th century. The church itself is interesting, however, what lies beneath is even more fascinating.

BASILICA OF SAN CLEMENTE – This is a sacred site, a place of worship that has existed for more than 2000 years. Here the visitor has the opportunity to step back in time and to explore a microcosm of Roman history. The 12th century medieval basilica that rises imposingly from Via Labicana was built on top of a much earlier Christian church. This early Christian church was in turn, built on top of an even earlier church, dating from 1st century AD. Three places of worship each built on the same site, one on top of the other. Beneath the earliest church there is also a Mithraeum. This was a pagan ‘sacred’ site, dedicated to the god Mithras. So here on one site in Rome there are four places of worship, each going back in time from medieval times to the pre-Christian era. 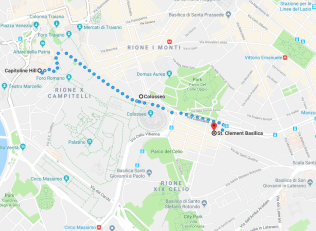 Whilst the Basilica of San Clemente itself is interesting, what lies beneath is even more fascinating. Having admired the mosaics in the 12th century church, it is possible to descend the steps down into the crypt of the church and to discover the 4th century church that remains below, probably about 10 metres below current street level. Then a further flight of steps takes you down, deeper into the bowels of the Earth, where the remains of an even earlier (possibly 1st century) church can be seen. This combination of structures, built one on top of the other, culminates with a Mithraic Temple, complete with altar, located probably 30 metres below the basilica. This was a pagan ‘sacred’ site, dedicated to the god Mithras, often known as a Mithraeum.

MITHRAS – This is where it gets interesting, Mithra was originally a Persian god, adopted by the Greeks to become Mithras. Mithra or Mithras was a warrior, born from a rock and commonly depicted slaughtering a bull. A powerful, dominating figure, popular amongst Roman soldiers as their protector and inspiration. Mithraic temples have be found throughout the Roman Empire, a famous example is the Mithraeum in Central London. It is thought the followers of Mithras were a secretive cult and were possibly persecuted by the early Christians.

THE CHURCH OF SAN CLEMENTE gives a fascinating insight into how ‘holy places’ have changed their role and function as time has passed, and ideas have changed. A progression from pagan worship to the more organised forms of religious worship deemed as ‘civilised’ today. The juxtaposition of these places of worship, chronologically located on top of one another creates an archaeological palimpsest that enables the visitor to literally travel back in time. A journey from the bustling, noisy streets of 2019 to the days of the Roman Empire, when small bands of people, with shared beliefs grouped together to worship and share ideas. A stroll back in time taking in more than 2000 years of human history.