There is a bright, sparkling quality to the air in the Lake District when it finally stops raining. The fields are a brilliant emerald green, dry stone walls are solid, grey, forbidding. The hillsides range from green to brown, with every shade in between. Higher up the valley the mountains are craggy and barren, jagged rocks pointing to the sky. Sheep graze in small paddocks, they are curious and friendly and rush up to walkers to say hello. This is an area of outstanding natural beauty, a land of lakes, mountains, rivers and streams.

When Queen Victoria was on the throne a very intelligent young woman called Beatrix Potter bought a small farm in the Lakes, in the village of Near Sawrey. She was fascinated by nature, wildlife, plants and animals. She was a writer, artist and an early environmentalist. The Lake District was her laboratory, study, office and source of inspiration. From this landscape came characters like Peter Rabbit, Benjamin Bunny and Mrs Tiggywinkle. The popularity of these children’s tales is enduring. When my children were small I rushed out and bought a complete set of the Beatrix Potter books, each one small enough for a five year old child to hold and enjoy. In 2016 we are celebrating the 150th anniversary of the birth of Beatrix Potter. 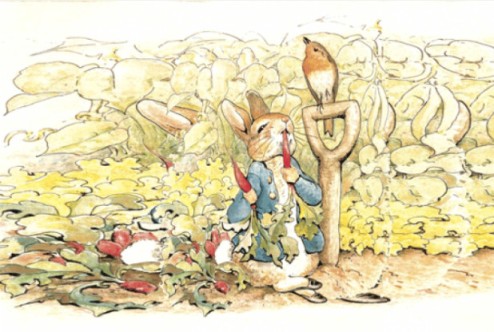 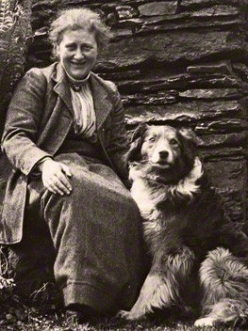 Jeremy Fisher has a spot of bother

The Tailor of Gloucester 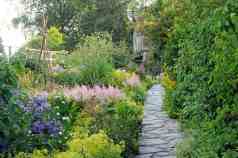 The garden leading to Beatrix Potter’s home
Just last week I was visiting the Lake District with my mother and my daughter. Three generations of women, complete with Sasha the female dog. We stopped at Hill Top Farm – Beatrix Potter’s  original home in the Lakes. It was pouring with rain, and the car park was packed. We decided to persevere and visit the house and garden. We put  on our anoraks and unfurled umbrellas. I am so glad that we did. Hill Top Farm is set on the hillside about two miles west of Lake Windermere. The house is completely charming and surrounded on two sides by a very traditional cottage style garden. There is a separate, fenced vegetable garden that looks just like the garden in the Tale of Peter Rabbit. I kept expecting to meet a very angry Mr McGregor. Mr McGregor is the farmer that chases Peter Rabbit out of his garden. I didn’t see him though!

The house itself remains as it was when Beatrix Potter lived there. Downstairs there is a parlour and sitting room. These were the rooms where Ms Potter received visitors. Upstairs we discover her private quarters, bedrooms and study. Next to her bed there was a sketch of the sheep that she could see grazing when she lay in her bed each morning. Her powers of observation were acute. She’d even sketched the sheep in an elongated style because the pane of glass in the window was imperfect and distorted the images she could see beyond. If you look carefully at the window you can actually still see the blemish in the glass – still distorting the trees and sheep in the pasture after all these years.

Beatrix Potter was not just a writer and artist. She was also a passionate environmentalist. She was especially interested in farming in the Lake District. She respected and valued traditional farming methods and was a supporter and protector of the native Herdwick sheep that were reared for wool and meat. In the 1940s she actually became the first female President of the Herdwick Sheep Breeders Association. She is often credited with the survival of the breed. By the time of her  death she had built up a portfolio of property that consisted of 15 farms and more than 4000 acres of land. Her estate was given in its entirety to the National Trust in 1943. It is their job to manage the land and the farms and to preserve them for future generations.

There is a small lane that winds its way up the hill opposite the house. This lane was sketched by Beatrix Potter and the end result is on display by the window. The view hasn’t changed at all.  In a delightful twist of fate the house across the road from Hill Top Farm is now tenanted by a woman who runs a business making hand bags and accessories using Herdwick wool. By complete chance, two years ago, my sister gave me a Herdwick handbag for Christmas. I love my Herdwick bag, it is stylish, practical and really useful. In fact my Herdwick handbag has been my loyal companion on frequent trips abroad. I love the idea that the wool from these Lake District sheep is being woven and made into beautiful and practical items right here in Cumbria. I also love the idea that Beatrix Potter was partly responsible for the preservation of the Herdwick breed. 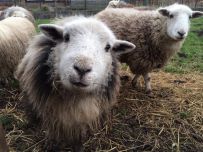 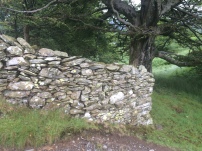 Dry stone walls are everywhere in the Lake District

A country lane in the Lakes 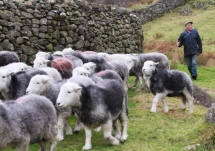 Glenn Wilkinson herds his flock of Herdwick sheep
In a much deserved acknowledgement I have to say that Hill Top Farm is brilliantly managed by the National Trust. The house and gardens are all staffed by helpful and informative volunteers.  The staff on duty when we visited were Fiona, Sally and Alexandra. They were so welcoming and knew a great deal about Hill Top and the life of Beatrix Potter. They really did enhance our visit to the property.

Later the same day we headed for another National Trust property on the other side of Lake Windermere. My daughter, Lucy, was keen to use her recently acquired National Trust membership for students. A bargain at about £30 a year. This time we visited the recently re-opened Townend Farm. An incredible farm house that was home to the same family for twelve generations. The farm house has been kept in tact, complete with numerous pieces of carved oak furniture. One of the members of the family, George Browne, retired in his forties and became an obsessive carver of wood. He would buy old dressers, sideboards and chairs. He would then cut them up, carve all available surfaces and re-assemble them into strange and complicated pieces of furniture. He was a Victorian vandal, chopping up good quality furniture to reassemble it in new and often bizarre ways. The staff at Townend were well informed and so interesting about the house. In the dining room, the huge dining table was weighed down with traditional dishes, pies and roasted meats, so that the visitor could appreciate the food served in a yeoman farmer’s house more than one hundred years ago. The final owner of Townend was Miss Clara Browne, as a fellow farmer she knew Beatrix Potter, who by that time had married a local landowner and sportsman and was known locally as Mrs Heelis. It is quite magical to look around this house, peer out of the windows and to imagine Beatrix Potter and Clara Browne discussing their Herdwick sheep or enjoying a cup of tea by the fire.

This magical land of traditional farms, wild high ground and sheltered lowlands has captured my heart. I understand why Beatrix Potter found peace here. I even appreciate her love of the Herdwick sheep. Of course it wasn’t just Beatrix Potter who adored the Lake District. William Wordsworth – poet, John Ruskin – writer and author of ‘The Stones of Venice’ and later Arthur Ransome of ‘Swallows and Amazons’ fame all found inspiration in this landscape of mountains, hills and lakes. So next time you are driving on the M6 motorway don’t miss out the Lake District, there’s solace and inspiration in those rich green valleys and blue-grey hills.

My trusty bike and Herdwick Handbag 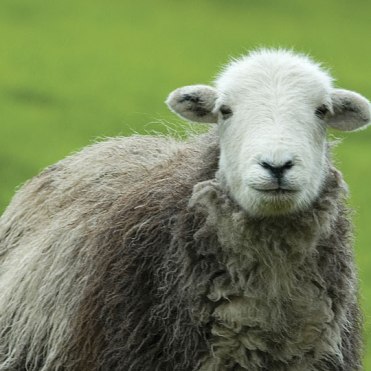 7 thoughts on “Beatrix Potter and the Lake District”