I’ve chosen to continue my ‘Capable Women’ series with the great character Dame Freya Stark. A British lady, traveller and linguist who died in 1993 aged one hundred.

There’s a very picturesque village in the hills about 50 miles north of Venice. The village is called Asolo and it hugs the hills and slopes that rise from the plains of the Veneto.This natural beauty inspired the poet Robert Browning to write the poem ‘Asolando’. Years later at the suggestion of ‘Pen’ – Browning’s son, Freya Stark’s father Robert moved his entire family to Asolo. When you visit this magical, hill-side town on a summer’s day it is easy to see why. From here, in clear weather, you can see Venice sparkling and shimmering on the waters of the lagoon. You might also glimpse the snow-capped peaks of the Alps to the north. The village is beautiful, houses, cottages and palaces jostle for position, stone walls enclose small gardens over-flowing with plants, flowers and fruit trees. There is a main square, ancient stone arcades, an elegant cathedral, a couple of churches and the inevitable bell tower. It was Asolo that Freya Stark chose to return to when she retired in the 1970s.

Freya Stark grew up in England and Italy, she spoke English and Italian fluently. As a little girl she was given a copy of ‘One Thousand and One Nights’ also known as ‘The Arabian Nights’. This was a collection of tales from the East, stories of adventure, drama and romance. Tales like Aladdin, Ali Baba and the Forty Thieves, The Adventures of Sindbad. This fuelled the young Freya’s curiosity and she developed a fascination for the East.  She was also well-versed in Greek myths and the epic poems of Homer and Virgil. During the First War (1914-18) she was a nurse in the Voluntary Aid Detachment (VAD). She worked in London and then in Udine, north-eastern Italy. I like to think that she might have met Hemingway at this time – he was an ambulance driver on the front between Austria and Italy (sadly there is no evidence, that I’ve found, for this). After the war she attended Bedford College (University of London) and began to learn Arabic. In the 1920s she made the brave decision to travel to the Middle East, unaccompanied and by cargo ship! She disembarked in Lebanon, where she established herself. Later she moved to Syria. She remained almost a year in Beirut and Damascus, where she lived in a traditional Islamic household. She wanted to learn the language and to understand the customs of the people of the Eastern Mediterranean.

A poster to recruit young women in the VAD 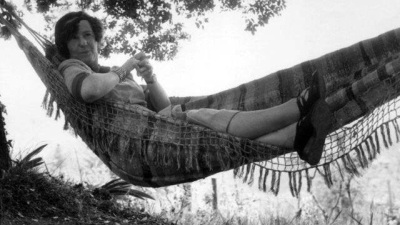 Freya at home in Asolo

In 1928 she made her first ‘difficult’ journey to the Jebel Druze area in the Syrian Desert. Travelling by mule and on horseback she was well received by tribal leaders. Her ability to speak Arabic was a great bonus. She loved the idea of venturing where others dared not tread! She loved people, regardless of their background, ethnicity or religion. The Jebel Druze journey resulted in her first published work in the Cornhill Magazine – a popular periodical of the day. Interestingly the tribal leaders were hospitable and respectful of this single British woman travelling without chaperone, in remote and isolated regions. In 1929 she travelled east again to improve her Arabic. This time her goal was the Valley of the Assassins an area of  Persia regarded as remote and lawless. After a year of travelling in Eastern Persia she published ‘Valley of the Assassins’ in 1934. Just a year later she headed off again to the southern tip of the Arabian Peninsula and the Hadhramaut region of Yemen. This resulted in the publication of ’The Southern Gates of Arabia’ in 1936.

Freya Stark was bold, single-minded, courageous. She was visiting remote corners of the Arab-speaking world almost one hundred years ago with little or no external support. She frequently dressed as a man to enable her to be inconspicuous. These areas of Syria, Iraq, Iran and Saudi Arabia are regions that today many Europeans choose to avoid. During the Second World War Freya was employed by the British War Office, and was based in Yemen and later Cairo. It was her job to mobilise the local population in favour of the Allied Forces (Britain and the United States). Once again her command of Arabic, French, Italian and English was very useful and enabled her to communicate effectively with local groups.

After the war Freya continued to travel – writing with great clarity on The Lycian Coast (modern day Turkey) and the Euphrates River Valley (in Eastern Syrian). She enjoyed a long and productive retirement in Asolo. In fact the town of Asolo is proud of Villa Freia (the house where she lived). The garden has recently been restored and you can visit the house on most Saturdays during the summer months. 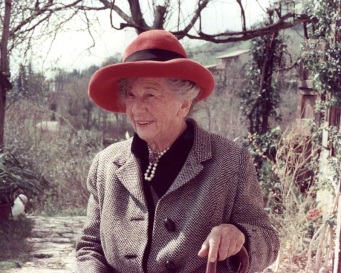 Freya Stark, as an elderly lady. She retired to Asolo in the 1970s. 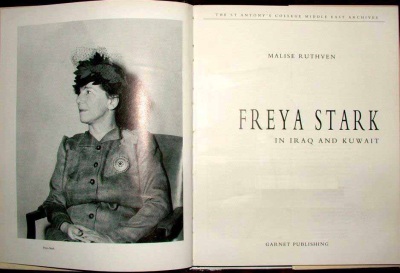 I think Freya Stark was a woman of great determination and tremendous stamina. She married, briefly, very late in life, she didn’t have any children. She focused her enormous energy on discovery, observation and consideration. I like to think that her vigorous engagement with life influenced both her output, which was vast and her longevity which was impressive. Like any good story there’s always more to learn and yesterday I met a lady ‘Gabriella’ who owns a small hotel in Asolo and was a friend of Freya Stark. For many years Gabriella owned a restaurant in Asolo called ‘Due Mori’ it’s still there today. Freya was a regular visitor to the restaurant and insisted on having ‘gelato nocciola’ hazlenut ice-cream on each visit for dessert. As Alessandro, a local resident, told me yesterday….’she wasn’t a grand and important person to us, she was just Freya, she lived in the big house off the piazza and she was always strolling around the village, she was a local, like us’…………..

If you’d like to visit Asolo – which really is a completely charming small town I’d recommend a couple of days. There’s the simple and traditional Hotel Duse in the heart of town – a historic and traditional property. In the main square is the Albergo al Sole – a very smart, boutique hotel. Nearby is the Villa Cipriani with beautiful gardens and a pool. There are numerous bed & breakfast properties too.  Asolo is a great place for visiting the Palladian villas of the Veneto. You’ve got Prosecco wines produced all around you – and the opportunity to think big thoughts as you tread in the foot steps of Freya Stark. Surely, one of the most formidable and impressive English female travellers of the early 20th century.

They say that Asolo is the City of Women, Freya Stark, Eleonora Duse, Caterina Cornaro all made their homes here. I can’t wait to learn more about this fascinating and picturesque town, with its rich and diverse history.