There’s a breath of fresh air breezing through the hills and rocky escarpments of Basilicata, in the far south of Italy. It’s a pale blue miniature bus, a tiny, tiny vehicle loaded with books. It’s probably the smallest mobile library in the world.

The driver is Antonio La Cava, a retired teacher, who decided to convert his ‘Ape‘ 3-wheeler van (Ape is Italian for bee) into a book repository that he could drive around his region calling at isolated and out-of-the-way villages and inviting the local children to borrow or even be given the book of their choice. Having retired from teaching after 42 years he felt there was still more that he could do when helping children to discover the joy of books and the written word.

Basilicata is between the heel and toe of Italy in the far south. This remote and arid area was very poor and isolated for centuries. It used to be called Lucania. Thousands of inhabitants emigrated to Naples, Rome or America. The novelist Carlo Levi was exiled here by the Fascists in the 1930s for his left wing views. He wrote a book, a memoir really, about his experiences and about the silent, obstinate determination with which the local people endured their fate. In those days, if hunger didn’t get you, then malaria almost certainly would. The title of the book was ‘Christ stopped at Eboli‘ implying that this was a god-forsaken land of hardship and loneliness. Today much has changed in Basilicata, there’s tourism here now and Matera, the provincial town is European Capital of Culture in 2019. This would have been unimaginable to the people living here in the 40s and 50s. How times change…

However the small villages in the hills are still isolated from life in the bigger towns. Antonio La Cava decided that his mini-library was going to visit those communities with 1000 inhabitants or less. For more than ten years he has been doing the rounds, driving through each of these villages, stopping, chatting to the local people and offering the kids a book each.  His passion for reading and the power of the written word is touching. He even carries a collection of exercise books. Kids are invited to write the first chapter of a story. He then collects the books and takes them to the next village where another group of youngsters write the second chapter. What a wonderfully creative idea.

I’m back in Basilicata in April and it’s my mission to catch up with Antonio and have a chat with him and offer him my sincere congratulations. Here’s a wonderful gallery of images of Antonio and his rather long-windedly named ‘bibliomotocarro’ which literally breaks down as biblio + moto + carro so in English that’s library/books + scooter + cart. Let’s call it a scooter book-van, how’s that? I’m open to any witty alternatives. 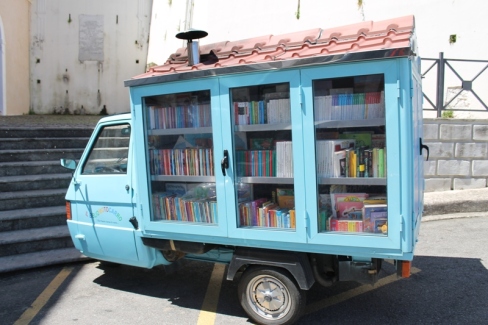 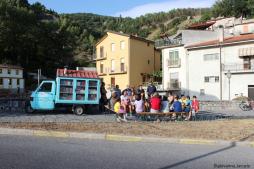 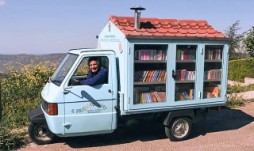 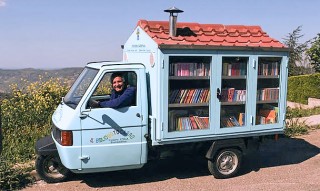 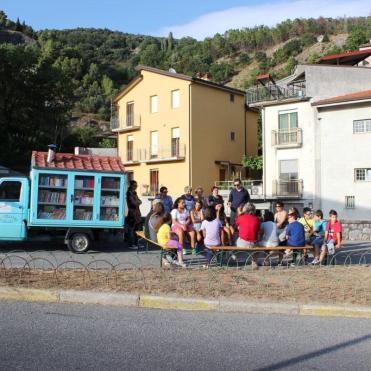 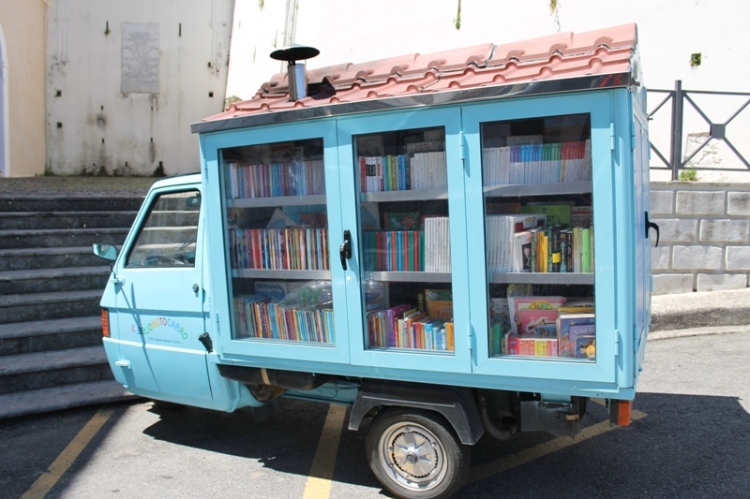 For me this is a truly heart-warming story. A tale of giving and considering others. The idea that one person can make a difference is demonstrated loudly and clearly here. The Italian government thought so too and in the recent opening ceremony celebrating Matera as European City of Culture 2019, Antonio La Cava was honoured as a respected citizen of Matera and the region of Basilicata. Antonio and his little blue van will play a key part in the Matera 2019 ‘City of Culture’ programme. Isn’t this the cutest and most charming story you’ve read in ages. It certainly was for me. So perhaps miracles do happen. Perhaps Carlo Levi was wrong, perhaps Christ didn’t stop at Eboli! Perhaps he’s alive and well and he’s cruising the highways and byways of Basilicata.

5 thoughts on “The smallest library in Italy”