In the 16th century there was a craze in Northern Italy amongst the very wealthy. The craze was to have a country house built by ‘the‘ architect of the day Andrea Palladio. Palladio lived and worked in Vicenza, just a few hours from Venice and had studied in Rome. He was a classical architect influenced by the Roman design principles of Vitruvius. He used simplicity of style and symmetry to create beautiful, elegant country homes. The super rich merchants of Venice were falling over one another to get a house designed by the man of the moment.

THE OWNER – One of these wealthy characters was Leonardo Emo – he commissioned Palladio to build a large country house in the village of Fanzolo just north of Venice. Villa Emo was the result, a masterpiece of classical architecture, both beautiful and practical. A central temple-style entrance, raised above the ground, gave commanding views of the countryside to the owners of the house, as they surveyed their land. The property was both a luxurious family home and a working farm. A unique aspect of the Villa Emo is that it remained in the hands of the Emo family until 2004. That’s almost 450 years in the ownership of one family.

OUTSIDE – The exterior of the house is very simple, with its warm golden stone and terracotta tiled roof. Wings stretch from the main villa to west and east, providing pleasant arcades, that offer protection from the sun and the rain. At the end of each wing is a square tower that would have been used as a dovecote. Manicured gardens extend to the front and sides of the house. Visitors would have ascended a ramp, rising several metres up to the imposing portico entrance and the front door. Arriving by carriage and catching a glimpse of the house in the distance, rising majestically above the plains, created an emotion of awe and wonder in the hearts of the guests.

SURPRISES – Villa Emo is a house full of surprises. The simplicity of the exterior gives no indication of the richness and vibrancy of the decoration within. When guests crossed the threshold from outside into the warm, comfortable interior, their senses were assaulted by a rich tapestry of colours, textures and perspectives. A team of fresco painters created sumptuous scenes, representing the seasons. Spring, summer, autumn and winter each personified by an elegant life-size figure, demonstrating, in the case of Autumn, the abundance of the harvest. These frescoes were painted directly onto the walls of the villa. The paint was absorbed directly into the plaster and then bonded to seal and protect it. Golden hues were used extensively to create a delicious sensation of warmth and affluence. In addition, the technique known as ‘trompe l’oeil’ was used to create the impression of depth in these paintings. In fact the frescoes are painted onto flat walls. Every detail that you see below is painted on a two dimensional surface. The columns, alcoves and even the detail above the door frame is all ‘a trick of the eye’ which is known as ‘trompe l’oeil’ in the art world. The technique is so effective that the viewer can imagine the characters on the walls are about to step into the room and possibly to begin a conversation. 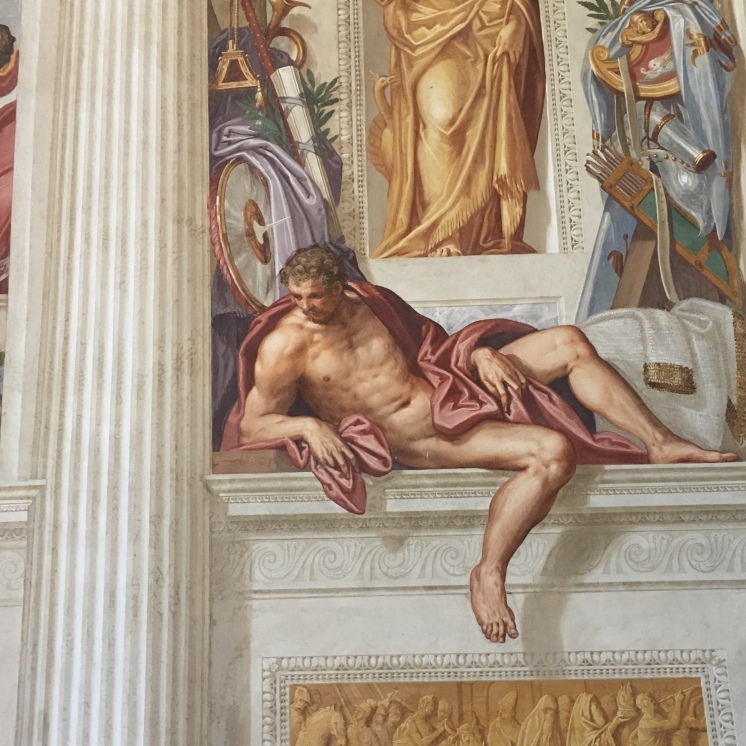 The reclining figure appears exhausted. Possibly after a battle, helmet, spears and body armour are depicted behind the reclining man.

Trompe l’oeil effect gives the impression of depth on this flat wall. 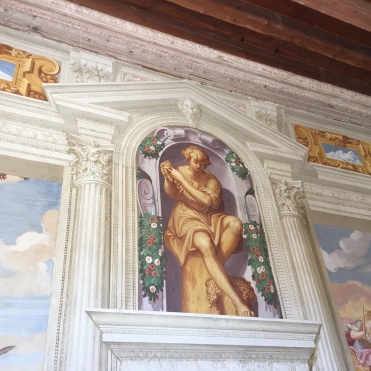 Villa Emo – the use of gold gives a rich and warm appearance.

The art of music is depicted in this scene.

This young servant boy is painted exiting the public gallery

FRESCOES – It’s worthwhile to take a few minutes to think about and appreciate the fresco paintings at Villa Emo. They were painted by a large team of skilled craftsmen, headed by Giovanni Battista Zelotti. He was a contemporary of Veronese. Both men were outstanding artists of their day – their command of colour, perspective, form and composition draws the viewer into the painting as if the characters are real. It is important to remember that these paintings were created in the 1560s, almost 500 years ago. Every fresco tells a story, often associated with the Roman gods. Neptune is featured below with his trident, a dolphin fish at his feet.

RURAL RETREAT – the country houses of the wealthy Venetian families were designed to impress guests and visiting dignitaries. Virtue, honour and heroism were common themes in the decoration of the rooms. A clean life in the countryside surrounded by fresh air, fertile land and the bounty of the farm was the ideal of the day.  A place where a family could grow and thrive in a healthy and safe environment. This was in stark contrast to the excessive lives of the nobles in Venice, where parties, drinking, betting and shady business deals could ruin an aristocratic reputation for life, not to mention the effect on one’s health.

FIVE CENTURIES LATER –  Villa Emo rises majestically and patiently from the green pastures of the Veneto countryside. The elegance of Palladio’s design is undimmed by time. The creamy, golden stone exudes warmth and hospitality. Just as Leonardo Emo intended. As guests cross the threshold today they stop and stand stock still absorbing the assault of colour and imagery that pours from the walls. Villa Emo is a treasure trove of architectural gems and world class fresco paintings. A leisurely stroll from room to room is a captivating experience. The visitor has the opportunity to step back in time and imagine life in the villa five centuries ago. Just a few years ago Villa Emo was featured in a TV programme about Historic Homes. Then in 2002 it was a location for the film Ripley’s Game, starring John Malkovitch. In 2004 after almost 450 years in the ownership of the Emo family the villa was sold and is now run as a ‘charitable foundation’ securing its future for generations to come.

TODAY – the legacy of Palladio can still be be seen throughout the Veneto region of Italy. Almost forty houses, designed by Palladio, still exist. In addition there are many palaces. All are the work of this exceptional and prolific architect. Towards the end of his life Palladio was made ‘Chief Architect to the Republic of Venice’. It was at this time that he was commissioned to design the churches of ‘Il Redentore’ and ‘San Giorgio Maggiore’ both of which continue to grace the skyline of La Serenissima to this very day. However, Palladio’s real, authentic legacy was the development of the luxurious, country house, exemplified by Villa Emo at Fanzolo. Next time you are in Northern Italy pop in for a visit – you’ll be overwhelmed.

UNESCO – In 1996 the “City of Vicenza and the Palladian Villas of the Veneto” including Villa Emo became a UNESCO World Heritage Site. The site includes almost forty villas designed by Palladio found throughout the Veneto region. The importance of Palladio’s contribution to western architecture and the influence that his style and design had in Italy, and then in the British Isles and the whole of the English-speaking world cannot be over-estimated. For more information visit Palladian Villas of the Veneto, Italy

PALLADIO’S LEGACY – the architect Andrea Palladio (1508-1580) was active in the area around Venice from the 1530s until his death in 1580. He was productive and hard-working, he left behind a huge body of work. His first big break came in 1538, when the scholar, poet and humanist Giangiorgio Trissino engaged Palladio to work on a new palace. Heavily influence by Roman architect Vitruvius, Andrea Palladio developed a unique classical style, embracing elegance, simplicity and symmetry. In 1570 he  published ‘I Quattro Libri dell’ Architettura’ which became the most important architectural publication for generations. Villa Emo was mentioned in ‘I Quattro Libri’.

When the ‘Quattro Libri’ was translated into English in the late 17th century, Palladio’s style became popular in Britain: Chiswick House and Burlington House, London are both perfect examples. Later in the United States. Thomas Jefferson chose a Palladian design

∗ Villa Emo is mentioned in Palladio’s ‘Quattro Libri’ this is what he says, 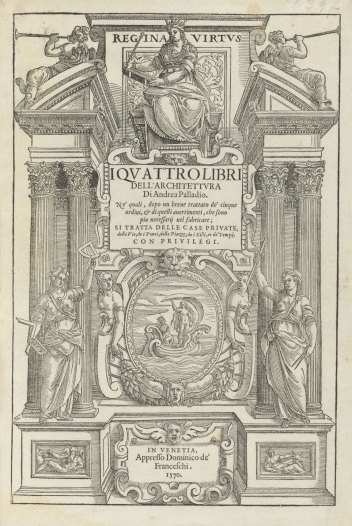