Some say it’s the bubbles that make you feel a bit tipsy. Others say it’s the elegant glass in your hand, filled with a delicious, crisp, pale yellow, sparkling effervescence of joy. Or perhaps it’s the handsome waiter replenishing your glass. It’s really hard to know. Whatever the precise reason, champagne is part of European culture, it is a delicious, sparkling alcoholic wine that can only be called ‘champagne’ if it is made in a particular region of north-eastern France, about two hours east of Paris. This region of chalk and limestone stretches from Reims in the north to Epernay and Ay in the south. It is home to literally hundreds of champagne makers.

One of the most famous champagnes is called Bollinger. Produced by the Bollinger family since 1829. Bollinger is based in Ay, a small town on the River Marne just outside of Epernay. Run by several generations of the Bollinger family, it came into the hands of Jacques Bollinger in 1918. Jacques was married to Emily, known as Lily Bollinger. When Jacques died suddenly at the age of 48 his widow was faced with a dilemma. Should she retire gracefully to the sidelines or should she take over the running of the business herself. She chose the latter. Lily was a familiar sight around the vineyards of Ay.  She would cycle her bicycle around her vines each day, inspecting the plants to ensure they were healthy. She purchased additional vineyards to increase the supply of grapes available for making champagne. During the war she worked tirelessly to support and help the victims of heavy bombing in and around her home town. Her bravery was later rewarded with a commendation from the British government.

After the war she travelled extensively promoting her Bollinger champagne and effectively ‘marketing’ her brand. Bollinger was already well known in Britain. Queen Victoria had given it a ‘Royal Warrant’ in 1884 – when Bollinger became the official champagne of the British Royal Family. How’s that for ‘ahead of its time branding’. On a trip to London in 1961, Lily Bollinger was interviewed by the Daily Mail newspaper, she gave the journalist an unforgettable quote that has been used repeatedly ever since, her words are charming, witty and poignant. The journalist asked Madame Bollinger how much she enjoyed her own product. This was her response:

This is a photocopy of the article as it appeared in the Daily Mail (London) in 1961.

The Champagne District of France 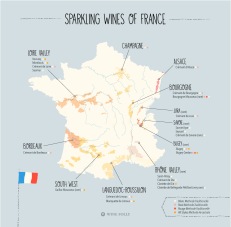 Champagne is located north-east of Paris

In the 1950s and 60s Lily Bollinger promoted Bollinger champagne constantly. In the 1970s Bollinger became the official champagne of the James Bond films. Bottles of the famous sparkling champagne have been seen in films starring Roger Moore, Pierce Brosnan and Daniel Craig. She ran the business actively until her death in 1971.

A few years ago the Bollinger family finished a complete restoration of Lily’s famous bicycle and transported it to England for a special promotional weekend. Guess what? Lily’s bike was cycled in a vintage cycling rally known as ‘Eroica Britannia’ and it was cycled by the current ‘UK Director’ of Bollinger Champagne – Lily would have been so proud of that.

I’d like to recommend Lily Bollinger as a ‘Capable Woman’ and a ‘Woman on Fire’ a person who dealt graciously and energetically with the hand that life dealt her. A woman of determination and dedication. A woman of substance and a woman of influence. Here’s to you Lily Bollinger!!

4 thoughts on “Lily Bollinger and Champagne”