At least a dozen cranes pierce the skyline of Nashville’s downtown area. This town is booming. New buildings are going up everywhere. Old brick buildings are being torn down and replaced with ultra modern condos and sky scrapers. They say there are eighty-five new people arriving in Nashville every day of the week. According to the New York Times this is one of the ‘top happening cities’ in the USA. It’s a far cry from the early European settlers who reached this curve on the Cumberland River in the 1780s and established a fort on the bluff. In those days the town was surrounded by miles and miles of wilderness.

I arrived in Nashville with a head full of country music, Johnny Cash, Willy Nelson, Patsy Cline. My head was buzzing with songs like ….’I’m on the road again’……and of course Johnny Cash’s…..’Ring of Fire’……..I was in a vortex of nostalgia that probably finished in about 1972. What I hadn’t expected was the dynamic and totally contemporary music scene that is going on right now in Nashville. You can hear at least a dozen, probably two dozen bands and musicians performing every night in Nashville. Many places have two concerts a night, the first around 6 pm and the second at 8 or 9 pm. The town is filled to the gunnels with aspiring musicians and song writers. I’ve been here two days and I’ve been to four gigs. There are numerous music venues too, from the huge Bridgestone Arena, which can take thousands, to tiny, damp basements that can take fifty, at a push.

The really incredible thing about Nashville though is the friendliness of the people. Everyone wants to share in the success of their city. I started chatting to Lindsey, who works at the hotel where I am staying. She gave me a list of ‘indie’ venues where I could see young musicians on the stage. She even suggested that she meet me there. I headed over to Basement East, on the other side of the river. When I got there they wouldn’t let me in – because I didn’t have a photo ID. As a British person that means a passport. I stood outside the door wondering what to do. Was it worth going all the way back across town to my hotel to pick up my passport. At that moment I got a message from Lindsey, I told her what had happened and she instantly offered to drive me back to the hotel to pick up my passport. I couldn’t believe her kindness. We only missed the first ten minutes of the concert. The band Two Way Crossing are a soft rock, country band with three amazing guitarists. The vocalists are a husband and wife team. Lindsey moon-lights as a PR-social media person for the music industry. She knows everyone, and spends her time videoing and tweeting the songs. After about an hour we are off to the next venue. this time it’s The High Watt – a brand new music space in a converted warehouse.

We arrive late and a young guy is already on the stage, a singer-song writer, he is soulful, passionate, with an amazing resonant voice. His name is Keelan Donovan. The drummer is incredible too. They only have a short set. It’s not an open mic night, it’s more of a showcase for young musicians. Keelan is by far the best. He’s recently had one of his songs featured on ABC TVs hit show ‘Nashville’ being performed by one of the main characters – so he’s very happy. The song is called, ‘Tonight feels different’ you can listen to it on You Tube. He tells me that he performed in London last year at the KPH (sadly now closed down). I’m not a music expert but I love this guy, he’s so sincere and has written some great lyrics. I really hope he succeeds. Lindsey and I go and get something to eat nearby, the least I can do is treat her to dinner. She tells me that her inspiration as a child growing up in North Carolina was Reba Mcentire. Everyone in this town is imbued with music, as a creative force, as a vision, as an inspiration. Everyone you meet is a writer, guitarist, pianist, singer – they are waiting, hoping, for a big break.

The next day I’m heading downtown to visit the traditional music hot spots. I’m starting with Broadway lined with honky tonk bars – each one has live music with the performers often working just for tips. It’s tough – following your dream. I’m also going to tour the Ryman Auditorium, home of the Grand Ole Opry. It was this show which broadcast from the late 1920s, first on the radio and later on TV that put Nashville at the centre of country music for the whole of North America. So many stars appeared on the Opry stage, Elvis Presley, Loretta Lyn, Hank Williams, George Jones, Dolly Parton, Tammy Wynette, Johnny Cash, the list goes on and on. I’m coming back here later to hear Ry Cooder.

Nashville impressed me again this morning when the Visitor and Convention Bureau director phoned me, personally, to welcome me to Nashville and to see if I needed any help or assistance. I run a travel company, as well as being a writer, so I’m used to discovering new cities and meeting the marketing teams in London, Paris or New York, I think I can honestly say I’ve never before encountered such friendly and genuine people. This has got to be one of the reasons why Nashville is such a success not just historically as the birthplace of country music but now as a booming and dynamic city of today.

Nashville is truly the home of country music right now. If you head over to Music Row the streets are lined with recording studios, record companies, producers offices, and all the associated businesses that the music industry requires. Last night at The Bluebird Cafe (another iconic music venue) I met a young lawyer who specialises in ‘representing and assisting’ her words not mine, performers and labels (the record companies). In fact her company is international and is affiliated with Universal Studios in California. The talk of the town at the moment is Chris Stapleton, a brilliant song writer who has been around for years. He has written numerous songs that have then been performed by other artists. Two years ago he and his wife went through his songs selected about ten and he recorded his first album ‘Traveller’ it has been a massive hit. He recently won the ‘Best Country Album 2016’ award. Mr Stapleton is a bearded, long-haired, cowboy hat wearing fellow, described by Wendy Geller (Rolling Stone Magazine ) as a …’Man of few words, lots of great songs’……….watch out for him. You’ll hear ‘Tennessee Whiskey’ very soon! 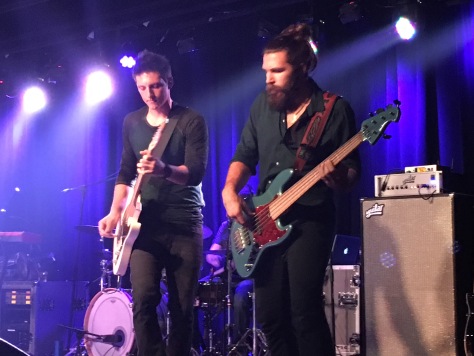 Last night at The Bluebird Cafe I was lucky to get a seat for a song writer event, where the writers actually performed their own work and shared the back story of the songs with the audience. The Bluebird is a funny little place, it seats only ninety people. Taylor Swift was discovered here in 2000 aged just fourteen. Keith Urban has performed here. Garth Brooks started out here too. Last night the song writers shared stories, sang songs, told jokes. It was like being at a friend’s party. I sat opposite Donna, the wife of Billy Montana, a respected writer and performer. She was charming, chatty and totally normal.

There’s one thing that you do need in this town to really fit in – and that is a good pair of jeans. I decided mine were saggy and inadequate. So I asked around and someone said that I should go to ‘Imogene and Willie’ over on 12th Avenue South. So off I went. This neighbourhood is really cool and trendy. There are bars, cafes, restaurants, nice boutique shops. Imogene and Willie’s is located in a very retro 1950s gas station. Inside the shop is decorated with stylish antiques and bric a brac. The shop specialises in blue jeans – just jeans and a few tee shirts. They have about eight styles. The sales people know how to sell jeans. They are very helpful with cut, colour, waist. They know the questions to ask. They also have a seamstress working in the back so when you’ve chosen your jeans they hem them for you, right there and then, free of charge. The girls in the shop Peggy Sue and Callahan were so helpful and such fun to spend time with – we talked about films, travel, Nashville. I can honestly say it was one of the best shopping experiences I’ve ever had. 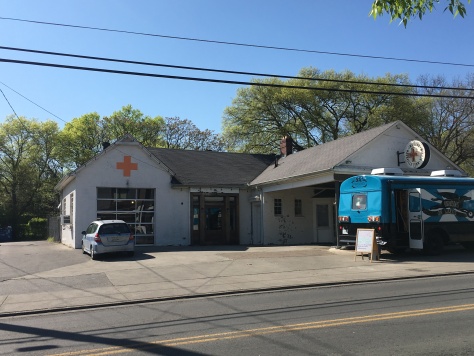 Filled with the coolest retro furniture

I floated down the road with my new purchase and had lunch at Burger Up – famous unsurprisingly for its burgers, they also do great salads. All the food is sourced locally from the Tennessee countryside. The sun was shining and Nashville sparkled in the spring air. You can probably tell from this article that I am loving Nashville – it has such an energetic atmosphere. It is friendly, the people are so hospitable.

Actually that’s it. I’ve got it – Nashville is like being at a friend’s house, it really is. You feel comfortable, welcome and in no great hurry to leave.

With special thanks to: 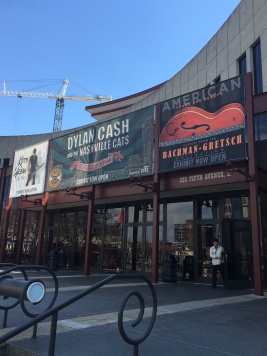 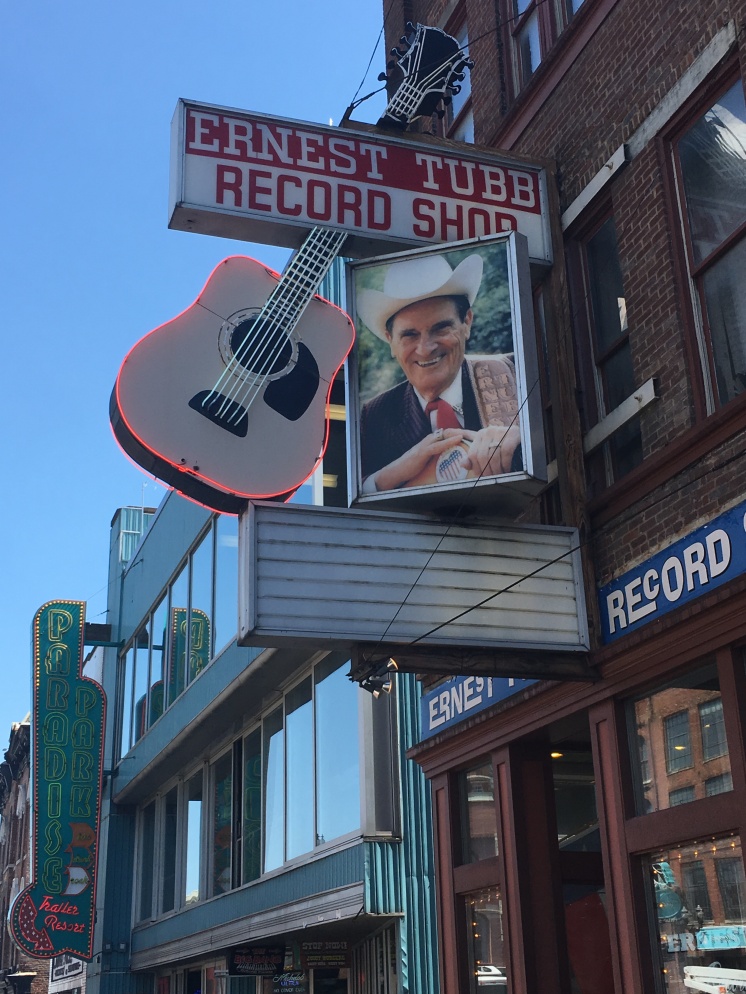 3 thoughts on “Nashville – city of dreams”