There’s something about the light in the south of France. The way the sun’s rays dance and sparkle over the turquoise folds of the Mediterranean Sea. This ethereal light attracted painters, sculptors and artists from northerly latitudes. They came to capture the light, colours and texture of the mountains, hills, towns and villages.

Eze village – looking down to the sea

The statues that decorate the Botanical Gardens, Eze village 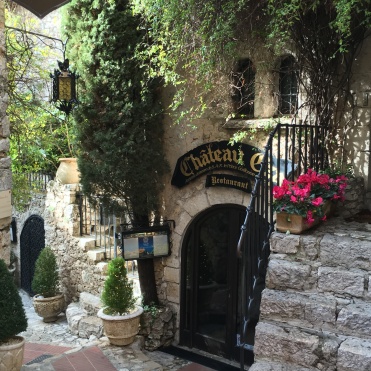 SOUTHERN FRANCE – This corner of southern France, especially the area from Nice to Menton has been part of my life since the 1970s. As kids we took our family holidays here. My dad, always an enterprising type had bought a boat. He quickly tired of the freezing weather that passes for summer in the British Isles. So with a series of charts (nautical maps of the sea) and various friends, some more willing than others, he set off across the channel and through the canals of France – his goal ‘La Mer Mediterranee’ of course. It took quite a while to make our way through France. The Canal du Midi was the biggest challenge, a waterway stretching from Bordeaux in the west to Sete, near Marseilles in the east. The canal had more than 300 manual locks to be negotiated. The majority of which were opened and closed by my sister and me – we were about fifteen or sixteen years of age. I’ll never forget the feeling of steering the boat out into the Mediterranean Sea after what seemed like weeks of hard labour. In true fashion my dad turned the boat engines off, as we bobbed around in the sea and said, have a swim girls. Let me know how the water feels. We jumped in and thrashed about enthusiastically. It was a new world for us, a blue-green sea, pleasantly warm, numerous other little boats. We’d reached our paradise.

BEAULIEU – We eventually settled on a delightful little port just east of Nice called Beaulieu. It was ideal for us Brits. Nice Airport was only 20 minutes away and Beaulieu became our base in the south of France. It has remained so ever since. The boats have changed but the set up remains the same. Even in February the sun is often shining. I’m here for a week at the moment to celebrate my dad’s 87th birthday. We’ve walked to Villefranche-sur-mer and had lunch at the fabulous Mere Germaine.

PERSIAN POETRY – A few weeks ago I was at a Persian poetry workshop learning a little bit about Rumi, Hafez, Saadi and Omar Khayyam. The interesting thing about these poets was their preoccupation with longing and yearning, which neatly sums up the human condition in the affluent west today. Many of us are lucky enough to have choices about how we live our lives and how we choose to spend our time. However these choices don’t necessarily make it easy for us to chart a path. The ‘modern malaise’ is typified by an inability to make decisions and stick to them. In Persian poetry there are constant references to long journeys, beautiful gardens, the scent of roses, fabulous green valleys. The travellers and narrators of the poems are seeking these magical environments, longing to experience comfort, tranquillity and calm. When my father headed off to the Mediterranean all those years ago he was seeking a semi-mythical land of blue skies and azur-green seas. The truth is that the Mediterranean Sea isn’t always calm, it can be very rough. Similarly the sun doesn’t always shine. Sometimes it pours with rain for days on end and because we don’t expect it we don’t have central heating in our apartment. Consequently it can be decidedly cold and miserable on a rainy day in March or even April. However it has to be said that the weather in the south of France is generally very good. The sea is usually a beautiful colour and the scent of mimosa is often in the air. Arriving from England, especially in the winter months, is always rejuvenating.

Oranges on the trees in February – that’s how mild it is in the winter in the South of France.

Eze Village – these stones have seen some feet over the years!

TODAY THE SUN IS SHINING – so I hopped in the car and drove up into the hills. Just behind our little town is the medieval hill-top village of Eze. It’s a medieval hamlet with tiny houses clinging to the hillside. There are no cars, just paths which accommodate pedestrians and were filled with donkey-carts in the old days. The village is delightful, characterful houses, stone staircases, art galleries, craft shops, a couple of really rather good hotels. Then of course the views, everywhere you look there is a panoramic view of the coast. You can see as far as St Tropez on a good day.  I climbed to the very top of the ‘rocher’ where the ruins of the chateau can still be seen. There’s a ‘Jardin Exotique’ on the higher slopes now filled with cactus and other succulent plants. It’s quite beautiful. The gardens are also decorated with sculptures of young women celebrating the beauty and power of the female form – in a way that the French do so elegantly. The statues are dreamy, ethereal and thoroughly charming. Beguiling even.

AT THE TOP of the ‘rocher’ I have a little picnic of clementines and water. Then, thanks to the wonders of modern technology I texted my son, a student in London, to find out the name of the woman (a fellow student’s mother) who has a shop in Eze. Her name is Claudia, I’m told, she is in town and she’d be delighted to meet me. All that took 5 minutes – not bad from a hill top over-looking the Mediterranean. So I trundled down the hill, located her gorgeous little studio and introduced myself. Now the next bit you couldn’t make up………turns out she’s Italian, married to a French painter, she’s 55 years of age. The same as me. AND she’s trying to decide what to do with the final third of her life. So here we are chatting in French about life, kids, family, as if we’ve known each other for years. Her window opens onto a magnificent panorama of the Mediterranean Sea. I’m busy thinking that this life might just be perfection. However the lovely lady does not agree, she has a dream, and her dream is to go and live in Greece. This makes me smile (discreetly). It takes me right back to the ‘human longing’ obsession. Our need to dream, to transpose, to wander in search of green valleys……

IT REMINDS ME of Woody Allen’s fantastic movie ‘Midnight in Paris’ where the modern hero is desperate to live in the Paris of the 1930s. The Paris of Scott Fitzgerald, Ernest Hemingway and Salvador Dali. Whilst the beautiful young woman he falls in love with is desperate to experience the Paris of ‘La Belle Epoque’ a Paris of the 1870s and 1880s. A Paris of Toulouse Lautrec and the Moulin Rouge. I love this delightful irony – life is always a question of perception. We think other places, other times are better, more intriguing, more fascinating than our own. Think of the famous story of ‘The Alchemist’ a re-writing of a much earlier folk-tale by Paolo Coelho. The hero travels for years in search of an elusive treasure. He searches ardently to find what he is looking for, only to discover when he eventually gets home, that what he was seeking was right there in front of him, if only he could have seen it at the time.

When I emerge from my delightful conversation with Claudia I find myself smiling again. It’s ironic (to me) that anyone could want to live anywhere other than here, in this medieval, charming, authentic, historic village. But then I should know better – it’s all a question of perception. Look at me, a perpetual traveller, what exactly is it that I’m seeking! Perhaps I’ll be able to answer that in a year or two – who knows!