This trip starts in Naples (Napoli) where we stay at a good quality, four star property. Hotel Palazzo Caracciolo (or similar). Right in the heart of the old city. Fabulous. The perfect location for exploring the tiny back streets of Naples, filled with character, noise and fun.

We’ll travel south today around the Bay of Naples to the spectacular Greek Temples at Paestum. The original Grand Tourists thought these temples were Roman. It wasn’t until the late 18th century / early 19th century that visitors and experts began to suggest Greek origin. They are roughly contemporary with the Acropolis in Athens (and very similar). Time permitting we’ll pop into the Medical Garden at Salerno – more on this later.

A morning visit to the Greek temples is a must. Then we’ll head inland to Matera. Matera is in Basilicata. It is a charming stone-cut old town, many of the houses are actually caves, hewn from the rock face. In 2019 Matera is the European City of Culture. It is also a UNESCO World Heritage site. An evening walk and dinner in a sassi (rock) dining room is on the cards tonight.

We’ll have a free morning in Matera to explore these polished stone paths. I can take you on a nice walking tour. Then around midday we’ll head to Alberobello to see the Trulli Houses (famous conical houses) of this region. Then we’ll continue south to Lecce, said to be the Baroque jewel of Italy. You are totally ahead of the game here ladies and gentlemen, years from now Lecce will be the European City of Culture – but not yet! The 19th April is a full free day in Lecce for us to explore, relax and unwind.

Today will be a fun day, we’ll have a leisurely start before heading north to see Polignano Mare (probably for a light lunch) and then on to Bari for our flight to Catania, Sicily. This evening will be our first night in Sicily, staying in Ragusa Ibla – another spectacular Baroque town. 21st April will be a full day in Ragusa Ibla, we’ll tour the area and see the sites associated with the Montalbano Detective Series. 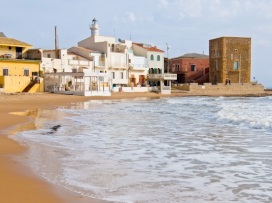 Today we head north towards Etna, Europe’s most active volcano, there have been a few rumblings recently so we won’t go too close. We’ll pop into Taormina for a short visit and then on to Capo d’Orlando on Sicily’s north coast. From here there are spectacular views of the Aeolian Islands. Nearby Cefalu is an idyllic Sicilian town with a fantastic cathedral. We’ll visit Cefalu either today or tomorrow.

From Capo d’Orlando we’ll travel west towards Palermo, the royal capital of Sicily. The Spanish princes had their court here for centuries. There are interesting palaces to visit, tiny water front villages to admire and the most amazing mosaics. Palermo is very impressive.

A quick trip up to Monreale this morning, the former royal palace. Before heading to the airport for our afternoon flight to Rome. Depending on flight timings I have various little treats up my sleeve for our last night in Rome.

Then for Sicily I’ve written these:

7 thoughts on “Southern Italy & Sicily with your own private guide”