I left the house on my bicycle today. I pedalled down the Woodstock Road and into the centre of Oxford. My destination was the Ashmolean Museum. A beautiful classical building, complete with columns and arches and stone carvings. I parked my bicycle outside and strolled through the elegant entrance hall. I made my way into the cafe for a light lunch, eager to start some writing after a little bit of essential sustenance. However as I rummaged, increasingly frantically in my bag, I began to suspect and then quickly realised that I had left my wallet at home. For goodness sake I said to myself – irritated by my stupidity. I checked my pockets and managed to come up with a few coins – not even enough for a cup of tea. So there I was sat in the cafe, no means to buy anything, silly, silly, me. I checked my messages on my phone and rather pointlessly messaged my husband. He was out and about and not available to deliver emergency funds – fair enough I thought. I actually laughed out loud at my idiocy. The lady on the table next to me smiled and asked me if I was ok. I explained my situation, I’ll buy you a cup of tea she offered generously. I politely accepted. Then her friend arrived, they introduced themselves to me as Kate and Lynda. I explained I was new in Oxford and they started to tell me all about the city and the numerous activities available. They were so friendly and interesting. If I hadn’t left my wallet at home I might never have met my two new friends. Thank you ladies – your generosity was much appreciated. 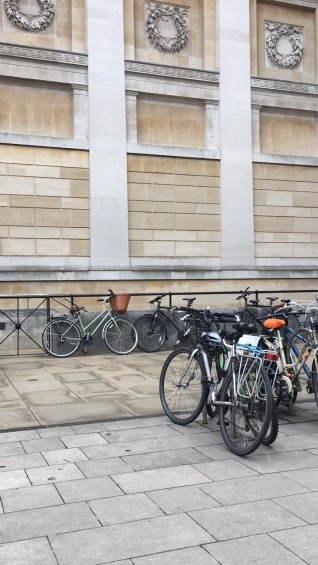 My bike outside the Ashmolean

Natural History Museum, Oxford
Once I had said my goodbyes and left the museum I headed over to the Radcliffe Camera, this is the library where I like to work in Oxford. I have a card for the library and I swiped myself in at the main door. However, the second entry point refused to let me in. The receptionist checked my card and informed me that it had expired the day before. Oh for goodness sake I said to myself again. Silly, silly me. I’d totally forgotten I had to apply for a permanent card and I’d allowed my temporary card to expire. I had two choices, go and get the card renewed or develop another plan. I decided to develop another plan. So I left the library and headed back into Radcliffe Square and started unlocking my bike. At that moment a friend of mine, who I’d been meaning to contact, walked through the square. We had a lovely little chat and agreed to meet in a week or so. I would never have bumped into her if I hadn’t failed in my bid to get into the library.

I cycled up the road to the Natural History Museum. This is one of my favourite museums in town. It was built in the Victorian Gothic style and it houses a collection of dinosaur skeletons, a model of a dodo (the long extinct bird) and numerous glass cases of stuffed animals. The interior of the building is a joy with arched columns supporting the upper floors. Each of the stone pillars is made of a different stone type; granite, limestone, marble. It was here in this building in the 1860s that Thomas Huxley, the scientist vigorously debated ‘Darwinism’.  This was Charles Darwin’s revolutionary theory on the evolution of man. The Victorian audience were unimpressed with the idea that the human species had descended from the ape family. In fact some members of the crowd took his ideas as a personal insult. It is said that one gentleman leapt to his feet and demanded to know if the speaker himself was related to a monkey on either his father or his mother’s side.

That’s the thing about Oxford, because this is a university town and because people have been studying here since the 13th century, and probably before that, a lot of clever people have walked these streets, developed new theories and ruffled a few feathers in the process. They continue to do so to this day! 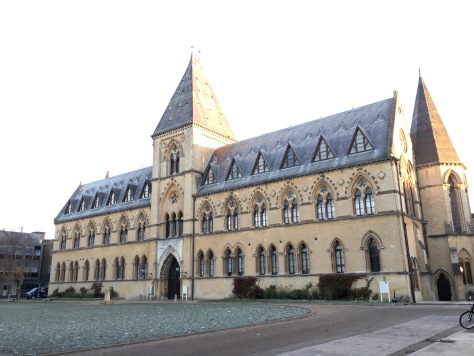 This door leads to the Entomology Collection 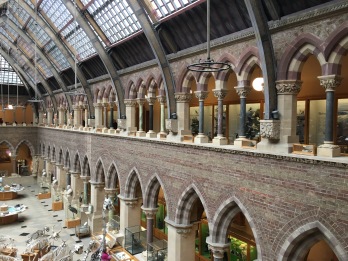 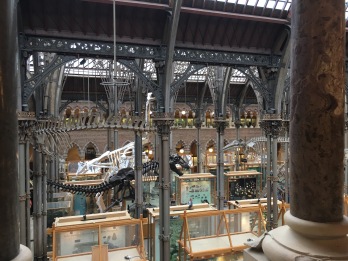 I’ve been here for a month now, perhaps a little more, and I’m loving every minute. We have a saying in England that people from the north are friendly and welcoming and that people from the south are less so. I have not found this to be true at all. As a newcomer to town I’ve been constantly struck by the kindness of total strangers. My fellow dog walkers who chat to me on Port Meadow in the mornings, lovely Lynda who bought me a cup of tea, and the lady who chatted to me in the bus stop queue. I’m loving my new adventure. In a funny sort of way leaving the house without my wallet this morning was the best thing that I could have done.

For more on being in Oxford – I’ve written several other articles about Oxford on my Educated Traveller blog you might like:

5 thoughts on “Oxford – A series of unexpected events…”