February 2017 – It’s official – I’ve arrived back in Oxford and I’m sat in the Upper Reading Room of the Radcliffe Camera. This has got to be one of Oxford’s finest libraries. An elegant circular building with a domed roof and fabulous classical proportions.

I’ve just been through the ‘admissions procedure’ and as an alumna (past student) of the university I’ve been given a temporary ‘reader’s card’ for a month until my permanent card can be issued. I’ve now got unlimited access to most of the reading rooms and libraries that are scattered liberally across the city of Oxford. The main library of the university is called The Bodleian, it is the oldest and largest in Britain. It holds a collection of more than twelve million books, periodicals and manuscripts. That should keep me going for a while!

The whole ‘admissions’ process was a joy. An incredibly helpful woman called Olga explained the system to me. I then had to complete a form about my background, why I wanted to use the libraries and personal details like address, proof of identity and so on. As soon as Olga saw that I was originally an undergraduate at St Hugh’s College, her face lit up with a big smile, she too had been a student at St Hugh’s. We discussed the college briefly and she told me that in a few weeks there will be a ‘newcomers’ event there that I may want to attend. I wrote down the details in my notebook – I’ll definitely try and make that I thought to myself. Olga asked me which library I planned to use, I told her I’d start with the Radcliffe Camera, always my favourite, and take it from there. She informed me that it was better to climb up to the higher levels in the library, as the lower levels tend to get crowded and very busy. Again I made a mental note of this useful piece of advice.

As I emerged from the office clutching my newly printed ‘reader’s card’ I walked into the large reception area and spotted a brightly coloured map hanging in a glass case. As a geographer I am obsessed with maps and I gravitated towards it, inspecting the place names, rivers and countryside in an attempt to identify the location of the map. I suddenly realised that I was actually looking at an enormous, highly detailed tapestry with every element carefully woven into the cloth. The explanatory notes told me that this was the ‘Sheldon Tapestry’ commissioned in the 16th century by a wealthy landowner. As I continued to try to identify the location of the map a very helpful staff member approached me and asked if I was interested in maps. As a geographer I’m passionate about maps, I adore maps, so my response was an emphatic ‘YES’. The staff member went on to explain that the tapestry was one of four originally woven in the 1590s, showing in great detail the rivers, forests and towns of the counties of Oxfordshire, Warwickshire and Worcestershire. The tapestry was recently restored in Belgium, where it was carefully washed in a giant bath. The cleaning has allowed the original colours of the tapestry to shine and sparkle as they did when the tapestry was woven more than 400 years ago. I spent another twenty minutes or so admiring the tapestry and thanking the library assistant for his interesting and helpful information.

So with a brand new ‘reader’s card’ in my pocket I couldn’t wait to get in the library and start some thinking and researching of my own. I walked through the ‘Old Quad’ of the Bodleian Library, past the doors marked in Latin with titles like ‘School of Jurisprudence’ and I walked into Radcliffe Square. The circular elegance of the ‘Radcliffe Camera’ towered above me. I marched round to the south side, checking that my bike was still padlocked to the nearby iron railings, which it was. I marched past the sign saying ‘PRIVATE’ and into the library, swiping my card as I went. I followed Olga’s advice and climbed the circular staircase to the Upper Reading Room and I established myself at a wooden desk. Out came the note book, lap top and pencils.

So here I am after all these years, sat in the Radcliffe Camera. The last time I was here it was 1984 and I was researching Southern Mexico, in preparation for a trip that I was about to make. The author of the book I was reading at the time, likened the topography of Mexico to a ‘crumpled pocket handkerchief’ in the sense that the landscape was very hilly and convoluted. I’ve never forgotten that description. Today more than thirty years later I’m going to be reading about the Alps. The spectacular mountain range that separates Germany, Switzerland and Austria from Italy. I’m interested in learning more about a group of German speaking people who moved south across the Alps and into Italy in the 12th century in search of pastures new. They called themselves the ‘Walser people’. Theirs sounds like a fascinating story. But first I think I have to document how special this morning has been for me and how delighted I am to be back in Oxford, complete with unfettered access to all the libraries of this great city.

Bodleian Library, Oxford – one of the original entrances 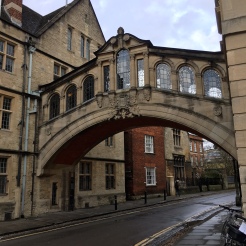 6 thoughts on “Oxford – this is Oxford”