So what do students at the University of Oxford really do with their time? Well in the 1980s, as a young undergraduate at St Hugh’s College, the answer is, lots of things. None of them remotely connected to studying. Rowing, cycling, day-dreaming, punting, parties, generally messing about in boats………..let’s start with rowing.

When I walk along the towpath by the River Thames and pass the college boat houses, one by one, a flood of memories almost overwhelms me. I remember rowing on this river, I remember the regattas, Christ Church, Torpids, Eights. I remember the team spirit, exertion, pain and the pitch black mornings.

Early morning outings started before dawn. There was a bike ride and then a jog down to the boat house. Then the crew would get the boat out, an eight, and lower it into the cold, dark water. Next we’d get the blades, our oars, lay them horizontally across the hull of the boat. Then we’d get in the boat, each rower, in turn, following the instructions of our cox. We’d push off from the bank, roll gently forward on the slide and turn the blade (oar) so it was sitting on the water.

A coach with a megaphone would cycle along the towpath shouting instructions, ordering us to stay balanced, to stay in time, to follow stroke. The cox would shout instructions at us too. The rowers all follow stroke. Stroke sits at the stern of the boat, immediately in front of the cox. Stroke provides the regular, steady rhythm that the rest of the crew follow. The routine was three outings a week, Monday, Wednesday, Friday. Out on the water by 7 am, back in college for breakfast by 9 am. Ready in theory for lectures starting at around 10 am.

By the fifth week of term we were approaching Christ Church regatta. This is a rowing competition where different college teams compete against one another in straight heats. By some miracle the St Hugh’s VIII won the Christ Church regatta. I’ve still got the cup somewhere. This was the pinnacle of my rowing career. After that it got harder and harder, much more competitive and required more and more time. It wasn’t long before I realised that my favourite part of the rowing outing was the walk across Christ Church Meadow at the end of the session, back up towards the Head of the River Pub, and the place where we left our bikes. As we cycled up the hill past Christ Church I’d day dream about Alice in Wonderland and on at least one occasion I was certain I saw the White Rabbit run into the quad. 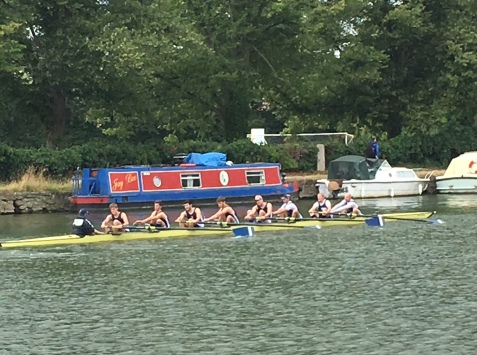 An Eight on the river, Oxford 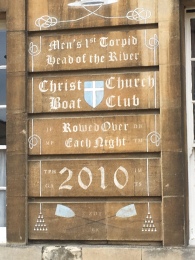 An eight on the river at Oxford 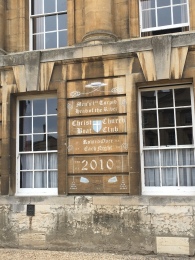 Eight on the river 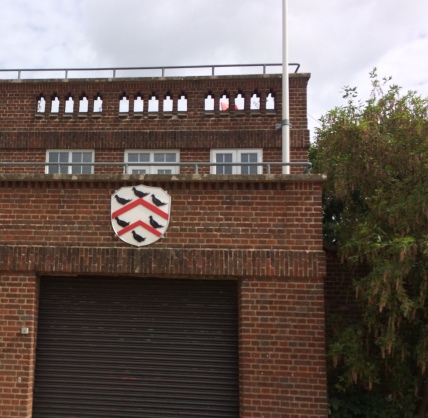 Lewis Carroll, author of Alice in Wonderland was an undergraduate at Christ Church and later a Maths don at the college. He was a very talented man, a mathematician, poet and writer. The Dean’s daughter Alice Liddell probably influenced Carroll when he created the Alice character for his tales. When you walk across Christ Church Meadow to the River Thames it’s easy to picture Alice and her sister snoozing by the river bank, and the start of Alice’s Adventures in Wonderland. The memory of Lewis Carroll is alive and well in the library at Christ Church. There is an unusual globe and a collection of small figures portraying many of the fantastical Carroll characters. The Mad Hatter, Queen of Hearts, Cheshire Cat and Dormouse are all there, some decorating the globe and others in a glass cabinet. 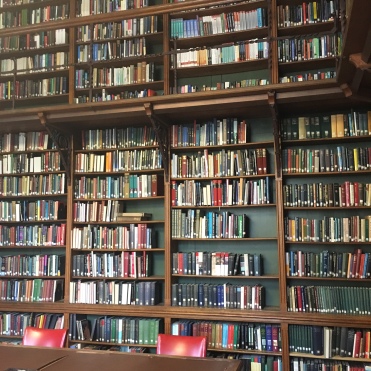 Naves of Spades quarrel about the painting duties

Gazing at these little characters it didn’t take long for me to disappear into that world, where the Queen of Hearts is shouting orders, naves are painting the roses, and very unhappy flamingoes are being used as croquet mallets. Those characters were an influence on us students, we held several Mad Hatter’s Tea Parties in the gardens at St Hugh’s. My friend Jo with her long blond hair was always Alice, which left the rest of us scuffling around to be other characters like the Dormouse, Cheshire Cat (my favourite) or the Mad Hatter.

Gatherings of friends and teaching staff took many forms in Oxford. There were drinks parties, punting parties on the River Cherwell, Afternoon Tea Parties, Fancy Dress Parties, Champagne Breakfasts (if someone was celebrating a 21st birthday). My favourite was a party that I was invited to at Pembroke College. When we arrived, in full evening dress of course, our hosts were nowhere to be seen. As we sat at the dining table, the boys, dressed in full camouflage gear abseiled through the windows – James Bond style. At another party, the dress code was black and white. I wore a black dress with a white wool coat, I felt like a princess. The party was a formal dinner that took place on the medieval minstrel’s gallery, above Merton College’s dining hall. Sometimes students were invited to sherry parties hosted by various academics. The idea was to encourage discussion and debate between undergraduates and fellows. These events were usually pretty stilted to start with, but quickly improved after a couple of generous glasses of college sherry. There was a time during my first summer in Oxford when it seemed as if those carefree days would never end. Tea parties, rowing, drinks on the lawn, sherry in the Principal’s Lodgings………..

The highlight of the summer term for me was punting. Punting is unique to Oxford and Cambridge. Punts are wooden, flat-bottomed boats, they are propelled through the water by a punting pole. The pole is dropped into the water, vertically by the punter, at the stern of the boat. He or she then pushes on the pole to move the boat forward through the water. The pole is also used to steer the boat, a bit like a rudder. A punt can accommodate six people, so there is the punter, with the pole, another person at the front with a small wooden paddle, and the remaining four people reclining on the cushions in the centre of the boat, drinking Pimms and offering helpful advice. Pootling along the River Cherwell up towards the Vickie Arms, a riverside pub, was the perfect way to spend a languid summer afternoon. 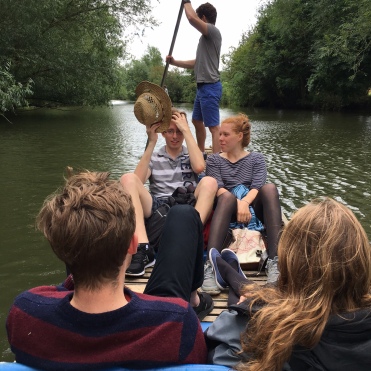 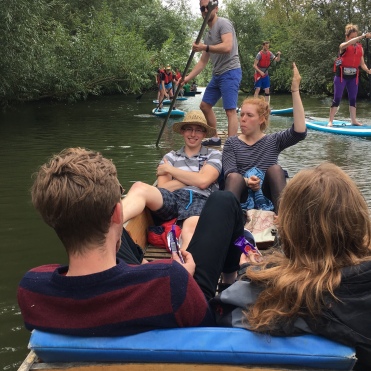 A plethora of punts…….

The academic side of Oxford had to be fitted in, around these numerous social and sporting activities. Lectures were optional, although generally speaking very worthwhile. What really kept us students focused was the weekly tutorial system. This was where I and a tutorial partner (just two of us students), would prepare an essay on a particular subject, 3-5000 words was the required length, and then discuss this with our tutor in a 90 minute tutorial session. Discussion was expected to be analytical, rigorous and insightful. It was vital to be prepared for these tutorials, there was nowhere to hide. Just me and my tutorial partner. Our tutors were frequently global experts in their fields. They did not suffer fools gladly. On one occasion I arrived at Christ Church for a tutorial on patterns of economic development in the Soviet Union. I had not prepared adequately for this intensely dull subject. My essay was pitiful to say the least. My tutorial partner, let’s call him Chris, was not much better. We sweated, fidgeted and waffled our way through this peculiar 90 minutes of self-inflicted torture. Our tutor, Judi Pallott, a European expert in Soviet economic systems made no secret of her complete contempt for both of us. We thoroughly deserved it.

When contemplating my various pastimes in that first year at Oxford, my favourite memories come from the water. I’d been brought up on a diet of ‘Wind in the Willows’ and ‘Swallows and Amazons’ by a father obsessed with boats and the sea. How could it be any other way. So here’s a short extract from Kenneth Grahame’s ‘Wind in the Willows’ where the Water Rat takes the Mole for an excursion on the river,

‘Do you know, I’ve never been in a boat before in all my life’. (said the Mole)

‘Is it so nice as all that?’ asked the Mole shyly, though he was quite prepared to believe it as he leant back in his seat………‘Nice? It’s the only thing,’ said the Water Rat solemnly, as he leant forward for his stroke. ‘Believe me, my young friend, there is nothing – absolutely nothing – half so much worth doing as simply messing about in boats. Simply messing,’ he went on dreamily: messing – about – in – boats; messing -‘

‘Look ahead, Rat!’ cried the Mole suddenly. It was too late. The boat struck the bank full tilt. The dreamer, the joyous oarsman, lay on his back at the bottom of the boat, his heels in the air.

“[Simply messing]…about in boats — or with boats… In or out of ’em it doesn’t matter. Nothing seems really to matter, that’s the charm of it. Whether you get away, or whether you don’t; whether you arrive at your destination or whether you reach somewhere else, or whether you never get anywhere at all, you’re always busy, and you never do anything in particular; and when you’ve done it there’s always something else to do, and you can do it if you like, but you’d much better not.”

“Look here! If you’ve really nothing else on hand this morning, supposing we drop down the river together and have a long day of it?” 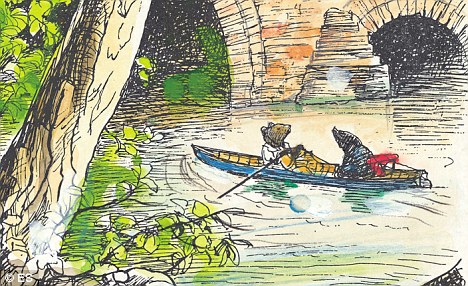 Rastty and Mole on the river 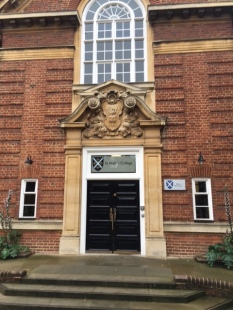 Who can argue with the Water Rat’s impeccable logic. A day on the river simply can’t be beaten. It doesn’t matter where you are going or where you actually get to – the destination is not the point. The enjoyment of pootling on the river gives a great feeling of satisfaction. Now if it happens to be a day out on the River Thames or the River Cherwell, its tributary, well that’s even better…………

4 thoughts on “Oxford – The University City”