IN THE OLD DAYS there was a luxurious boat called the ‘Burchiello’ that cruised the waters of the Venetian lagoon and the Brenta Canal all the way from Venice to Padova (Padua). The boat carried wealthy travellers from St Mark’s up the Grand Canal and across the lagoon to the ‘Naviglio Brenta’ and eventually to the university city of Padova. The route was lined with magnificent country houses, built by the merchants of Venice. Many of these villas were designed or inspired by the architect Andrea Palladio.These were vast country estates where the affluent could escape the heat and humidity of the Venetian lagoon during the summer months. 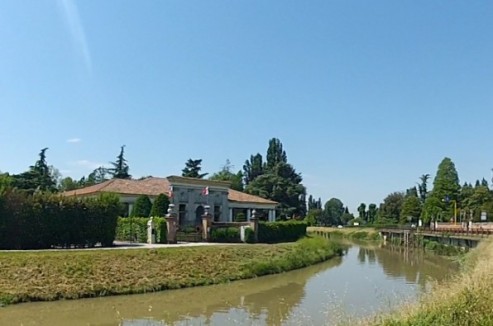 Burano the fishermen’s island floats mysteriously in the Venetian Lagoon

The Naviglio Brenta, or Brenta Canal, runs from Venice to Padova – it is lined with historic houses

Historic Map showing Naviglio di Brenta – from Padova to Venezia. The Burchiello was a historic boat that sailed the Brenta 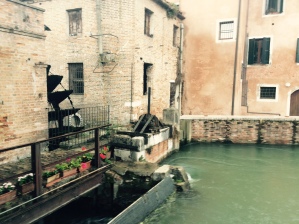 PALLADIO – The architect Andrea Palladio was born in Padova, but spent most of his working life in nearby Vicenza, where he started his working career as a stone mason. He was fascinated by the principles of classical architecture favoured by the Greeks and then the Romans. He studied the lines and dimensions used in Roman buildings and was influenced by Vitruvius, a Roman architect (active from 46-30 BC). Palladio himself became the most popular architect of the 16th century. The wealthy of Venice flocked to him to design or modernise their country homes. Years later, in the days of the Grand Tour, Lord Burlington an English aristocrat, spotted Palladio’s designs and decided to replicate them in England. The result was Chiswick House, London and Burlington House on Piccadilly. Nowadays Burlington House is the home of London’s Royal Academy. It is probably reasonable to say that the classical designs of Palladio have been one of the most influential forces in European and American architecture ever since.

HISTORIC VILLAS – There are more than 40 villas attributed to Palladio still remaining in the Veneto area today. I know this because one of my clients, about ten years ago, asked me to design a tour for him and his wife. They wanted to visit every remaining Palladian Villa. At the time I would have estimated this number to be about a dozen. In fact there are about 43. The planning was complicated slightly by the fact that they wanted to visit every villa, over a three week period and they wanted to do the whole thing by bicycle. Of course I love a challenge. I trawled the internet and finally came up with some Italian military maps of the Veneto that showed (if you bought enough of them) almost every villa. I then laboriously grouped the villas into threes and fours, so that a visitor could, in theory, get around perhaps four to six in a day.

TRULY TAILOR-MADE – The time finally came for Albert and Rapunzel to embark on their journey. All was planned, the itinerary was prepared and off they went. I have to say I had and still have, nothing but admiration for this optimistic pair. Over the three weeks they did remarkably well, checking off villas from their list with gay abandon. They visited derelict villas, villas in ruins, private homes and villas that are now art galleries or public buildings. All this took place in the Summer of 2008, the weather was incredibly hot, about 38 degrees centigrade in the second week of the trip. Dehydration was constantly lurking around the corner or just over the brow of the next big hill. Our heroes stuck to their guns and continued to pursue their goal of visiting every known villa attributed to Palladio. For good measure, I even threw in a Palladian dining experience, where they spent the evening at a Palladian Villa where they enjoyed a 16th century style banquet with multiple courses. It was a highly carnivorous affair, as one might expect of a fine Renaissance dinner. It was only much later that I discovered that Rapunzel was in fact vegetarian. However as the only non-Italian guests at this huge event they found themselves the centre of attention and almost certainly and possibly unwittingly, a principle attraction of the evening. Local Italians lined up patiently to chat to them confusing them with visiting British aristocracy who’d promised to attend and failed to actually show up.

THE BRENTA & BURCHIELLO – In the 17th century a magnificent, mirrored and gilded vessel cruised the waters of the lagoon from Venice to Padova. It was known as the ‘Burchiello’. Venetian aristocracy loved the boat and the freedom it offered. It was a  comfortable means of getting from the city to the countryside. Ideal for conversation, gossip and the occasional game of cards. It was also a perfect escape, physically and mentally from the rigours of the city.  As soon as the ‘Burchiello’ moved from the open waters of the lagoon to the sheltered banks of the Brenta the Venetian ‘milordi’ would breath a sigh of relief. Especially when they spied the magnificient  Villa Foscari or as it is better known Villa Malcontenta, peering guilelessly from behind it’s willow fringe. Villa Foscari is known as ‘Malcontenta’ meaning unhappy or sad because it was built by the Foscari brothers, an eminent Venetian family. It is alleged that one of the brother’s wives was locked up here, in isolation, as a punishment for her infidelity. The story goes that the sad and forlorn lady was kept here in her luxurious, gilded cage, alone and miserable. However for lovers of Palladio this villa is one of his finest. Symmetrical, elegant, classical it is a purist’s dream.  There are many references to classical architecture in the building. There is a square pediment, which acts as the villa’s foundation plinth and imposing stairs that lead up to the main entrance. On the garden side of the villa there are a series of semi-circular lunette windows that are reminiscent of the style of Roman bath houses or thermae. The elegance of the house and the exotic story of the inhabitants was enough to charm any visitor.

ARISTOCRATS AT PLAY – I love imagining the Venetian elite on the ‘Burchiello’ as it sailed up the Brenta towards Padova. A leisurely cruise away from the lagoon was the perfect distance from Venice’s palaces and courtyards for a little bit of intrigue and perhaps a spot of romance. Casanova loved a day out on the Burchiello. It gave him the opportunity to meet new young ladies, in a relaxed atmosphere, as the boat progressed sedately along the water way. On board the Burchiello was lavishly appointed with huge mirrors, paintings and rich, brocade curtains. Smartly uniformed servants delivered food and wine to small groups of guests. There were card tables, an outdoor viewing area and even the possibility of a small wager. It is said that Galileo travelled on the Burchiello, so too did the poet Byron. The Burchiello was painted by Tiepolo and Canaletto, written about by Goethe and Goldoni. Thomas Coryat, one of Britain’s earliest travellers to Europe (for leisure purposes) wrote about the Burchiello glowingly. The Burchiello welcomed French and Russian kings too.  Even Napoleon journeyed on the Burchiello from Venice to Villa Pisani at Stra, the largest of the magnificent country houses on the Brenta. He was so impressed by Villa Pisani that he seized it for his son-in-law! 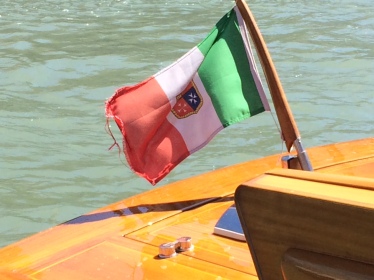 The labyrinth at Villa Pisani (Nazionale) – a huge villa in the Palladian Style. https://wp.me/p5eFNn-4UY

CRUISING THE BRENTA – From then on it is an endless stream of fabulous country houses and villas all along the Brenta up to Padova. The waters of the canal-river are fascinating too, they are a blue green colour bursting with oxygenated water that pours down from the Alps, through the foothills and across the plains of the Veneto. Finally gushing out into the Adriatic Sea via the waters of the lagoon. The river has been tamed over the years, there are five locks between Padova and the lagoon controlling the water flow and allowing a gradual descent of 100 metres through a series of locks and weirs. At Dolo there is a recently restored water wheel, where you can observe the flow of the water and the strength of the currents close up. Next door there is a lovely little bar and enoteca where you can enjoy lunch and a selection of wines and cheeses.

A little further along the canal is the magnificent Villa Pisani also called Villa Nazionale. This was requisitioned by Napoleon when he invaded and took over the Venetian Republic in 1797. It is very impressive with its huge gardens and really difficult labyrinth. There is a tower in the centre of the labyrinth (or maze) and a member of staff acts as a spotter to assist tourists who fear they might be lost for ever in its complicated and tortuous paths.

NEARING PADOVA – On the outskirts of Padova visitors encounter the austere looking Capella Scrovegni. It looks like a plain brick building and yet when you go inside through the climate controlled anti-chamber you enter into a magical world of Giotto frescoes depicting the life of Christ. These frescoes were commissioned by Enrico Scrovegni a local banker and money lender in the 14th century. He hired Giotto to cover the interior walls of the chapel with stories from the life of Christ and from the Bible. Locals are convinced that he was consumed with guilt after a lifetime of extorting money from the poor citizens of Padova. Mindful of the sentiment that it is harder for a camel to pass through the eye of a needle than it is for a rich man to enter the kingdom of heaven, Scrovegni set about creating a legacy for his city.

RICH HISTORY  – The rich history of this small area running along the Brenta Canal from Venice to Padova is quite incredible. The villas that can be found here are each unique and often exceptional. An excellent base for visiting this area is the comfortable and welcoming Villa Margherita Hotel located in the small town of Mira. The hotel is run by the Dal Corso family. Round the corner is the Villa Franceschi, owned by the same family. I stay here in Mira whenever I accompany a small group to the Veneto. As Venice itself becomes busier and busier with tourists I increasingly prefer to stay on the Brenta Canal, on what the Venetian’s call the mainland or ‘terra ferma’. You can pop into Venice by boat for the day or even just an afternoon. So much more civilised!! 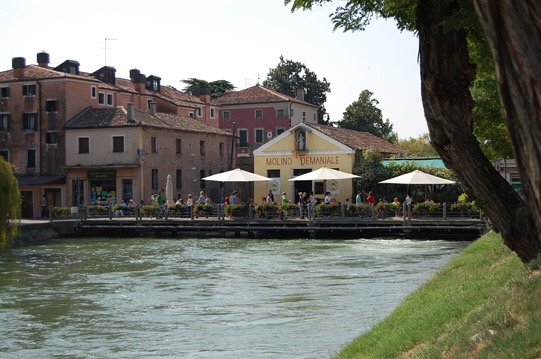 18 thoughts on “Venice to Padova by the Brenta Canal”